Seems fitting that while we have a wildfire-smoke-hazy / practically opaque sky here in Seattle, that I should do the write-up for one of my clearest-ever beers — a Munich Helles that I’m calling Horst:

Horst was the name of my German-born grandfather, and though my memories tell me that he was more of a Martini and/or wine-drinker, I suspect that the Munich Helles would have been his beer of choice.1

With him in mind, I decided to take the bait that every lager-brewing homebrewer eventually takes: Can I make a decent Helles?

I tinkered around with a couple of recipes, trying to keep it simple (Helles!) but to give a little extra malt-flavor punch without going full decoction (lazy!) — and otherwise chose a mash scheduled based on Give ’em Helles. Feeling satisfied with that, and having cultured up a pretty large starter…2 OFF WE GO! 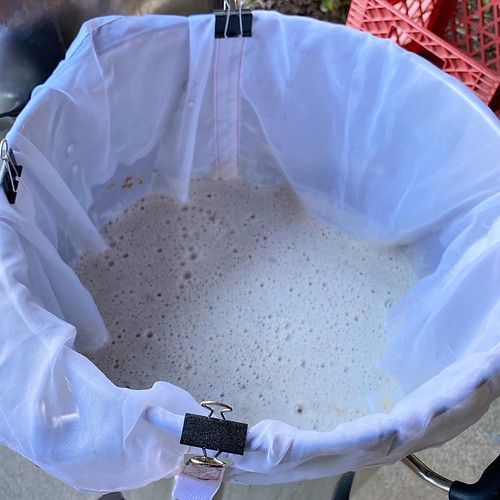 I mashed in at 148.5ºF for my first rest. Then… alas! Somehow my pH meter was reading 4.55 which… yikes that’s low.3 After 45 minutes, give it the second infusion to bring it up to 157.9ºF and let it rest for another 30 minutes. And then another boiling water infusion for the mash-out.

Flame on for boiling. Ninety minutes. One and one-quarter ounce of Hallertauer Mittelfrüh at 904 and then the remaining ¾ oz. at flame-out. 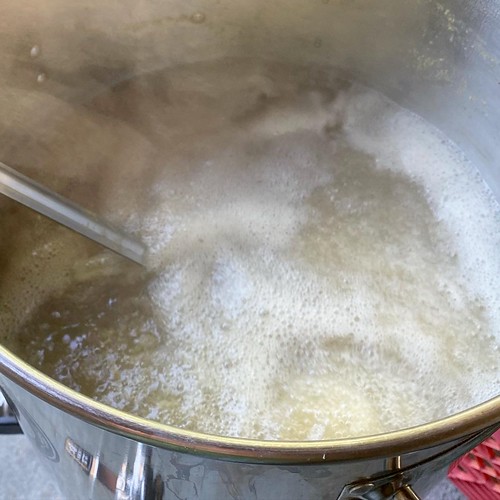 Chill it as much and as fast as my little immersion chiller can manage, then run off just over 5 gal. into the carboy at an O.G. of 1.050. 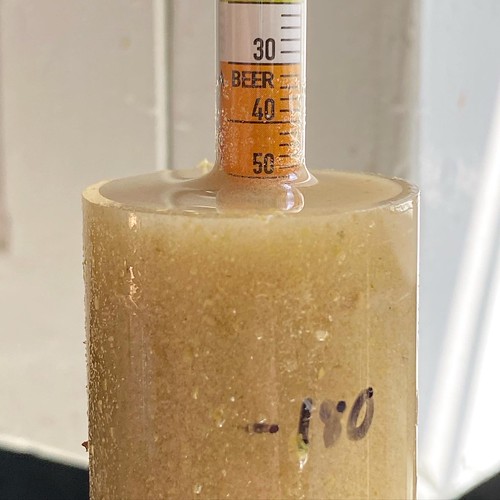 Get it into the fermentation chamber and set that for 52±1ºF to help it get the rest of the way down to pitching temperatures. 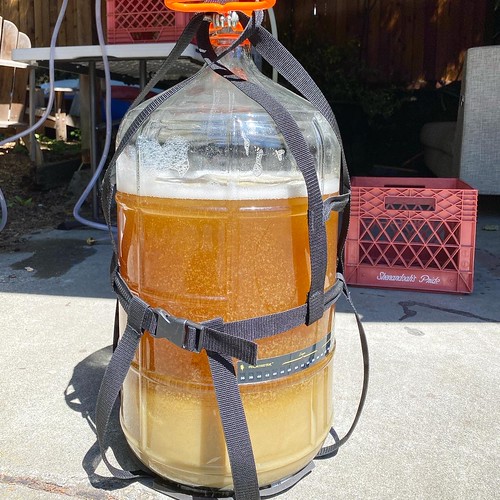 Anyway… some of the clearest wort I’ve ever produced. 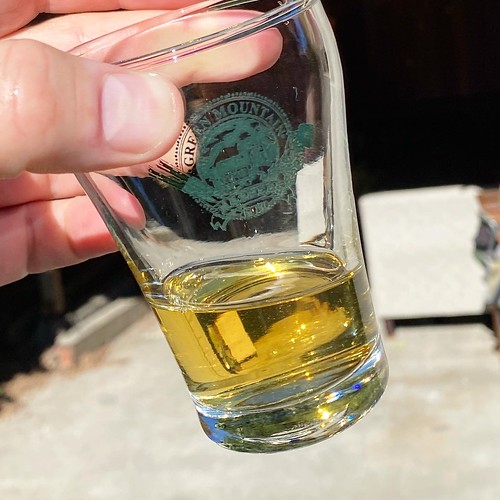 Once the wort was chilled below 52ºF, I decanted the supernatant off the starter and pitched approx. 500 ml of slurry.

By about +12 hours, a krausen was starting to form and bubbles were definitely happening in the blow-off bucket. There was a bit of sulfur aroma off-gassing, but nothing that hasn’t caught my nose early in a lager fermentation.

After two solid weeks at 52±1ºF, I drew off a sample for gravity and sighted it at 1.010 — also looking pretty darn clear. 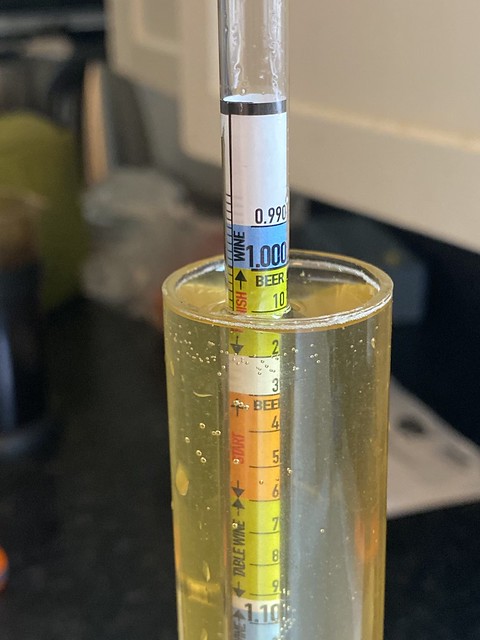 At this point, I racked it to a keg, put it on-gas, and let it lager for a month before my patience ran out and I just had to subject myself to an early first pour. 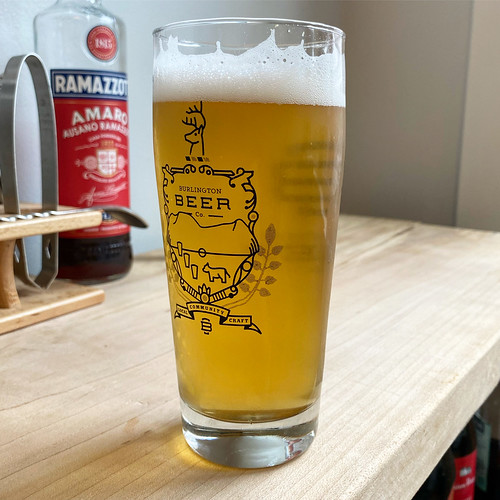 Which was just fine by me.

It’s recognizably a German lager. Smooth and round and malty. Would likely fare well in competition if submitted as a 4A. Munich Helles, though somewhat stronger than it ought to be. I like it just fine. 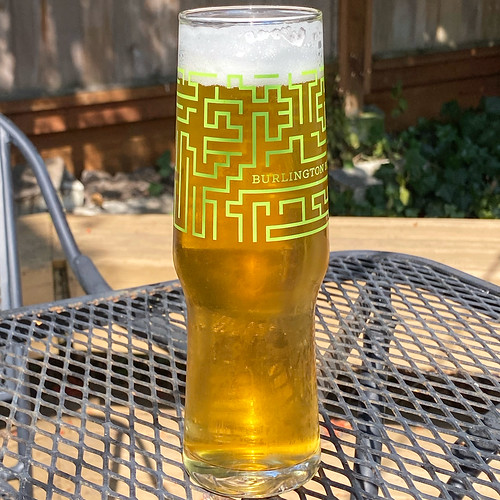 OVERALL IMPRESSION. Very good example of the style (bordering on excellent?) with a couple of minor faults. Malt-forward with restrained but evident hops. Toasty element takes it slightly out-of-style, though it’s too dry to read as a Festbier and not quite strong enough for a Helles Bock. Slight-but-detectable sulfur note could be cleaned up through krausening or (perhaps) a slightly longer lager5 — otherwise fermentation was well-managed. Finishes slightly crisper than style ought — perhaps a water profile favoring a fuller impression (i.e., more calcium chloride?) Slight oxidation doesn’t distract, but could be resolved with more careful handling on the cold side.

I’m enjoying this one quite a bit. I find it smooth and refreshing and pretty tasty overall. To get closer to the style, I suspect I might look for a way to boost the malt impression, while also backing off on the toastiness — perhaps dropping the Vienna and either swapping in half-as-much melanoidin malt, or else all-in on pilsner malt and (gasp!) figure out how to do that decoction. I’m pleased with the hopping, so probably no changes there. Changing up the water profile could help encourage a softer, rounder finish — swapping from “Yellow Balanced” in BeerSmith to “Yellow Full” would increase chlorides. (Oh — and figure out that mash pH!) But these seem like fairly minor tweaks overall, and in the meantime… 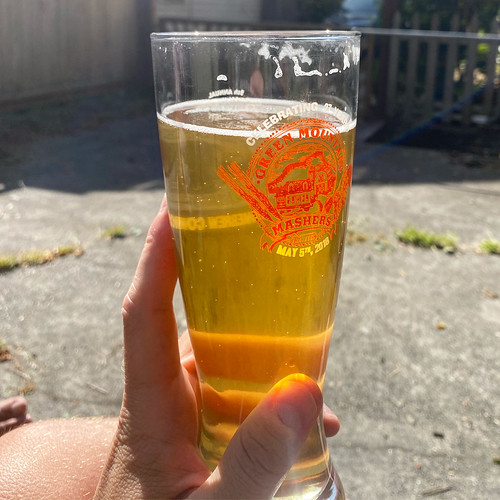 The all-grain (BIAB) recipe for Horst is as follows:

One Response to Homebrew #105: Horst