Precisely why we decided to move back to Vermont from Washington is a story best reserved for a separate and more thoughtful blog post1 but needless to say: I felt compelled to capture a few notes about my cross-country drive while the details were still (relatively) fresh in my mind.

First, let it be known that this all happened… really fast. I’d been to Vermont and Maine on vacation during the last weekend in July and first week of August (respectively) with every intention of trying to ride out the next year still in Bellingham, Washington. But staying didn’t make sense. Getting moved back before the lease expired and before Vermont schools went back in session would be challenging but not impossible. But that also meant moving fast and with fluid plans. Much faster and with much more fluid of a plan than I’m typically comfortable with.

Nevertheless, moved fast and with fluid plans: we did. Back from Vermont, and within days we’d decided this was what we were doing. Within about two weeks, A. was on the road with the boys to get them back before school started.2 And I had about three mostly solo weeks3 where I was scrambling to sell off, donate, or otherwise trash the stuff that didn’t make sense to bring back, and to line up moving containers and moving help to fill them with the stuff that did make sense to keep. 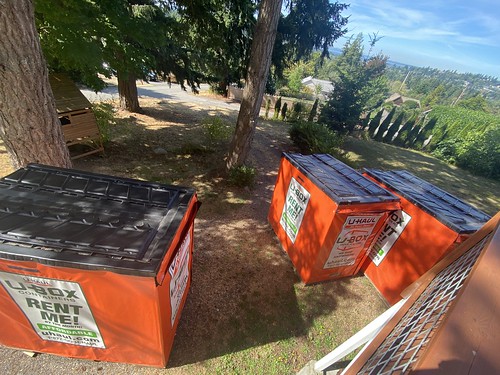 Three U-Box containers from U-Haul. Each one completely full. And I still needed to stick a bench and three barstools on the curb with a “FREE” sign. (And let’s not get me started on what a shitshow the U-Haul U-Box experience turned into.)

I took advice from a friend who has done four cross-country moves4 and plotted out my route, created a drive-time budget for each day, and reserved motel rooms ahead of time. The first day would be a little less driving because I would need to spend the morning (1) finishing the last of the cleaning in the old house and (2) loading the critical must-have items into the Forester. 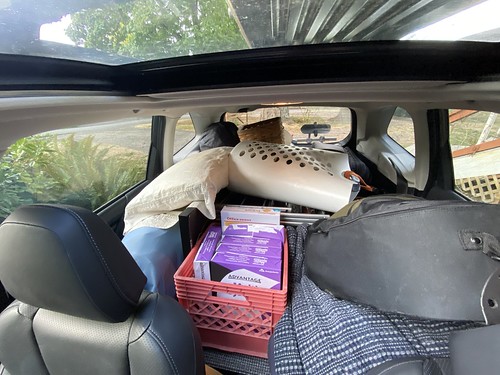 Don’t give me shit about reams of paper. It’s a long story.

For that first day, I felt like it was important to at least get out of Washington. My original plan was to get as far as Missoula but for whatever bizarre reason, there were no vacancies in the whole city! Easing down from that, Coeur d’Alene, Idaho seemed far enough. 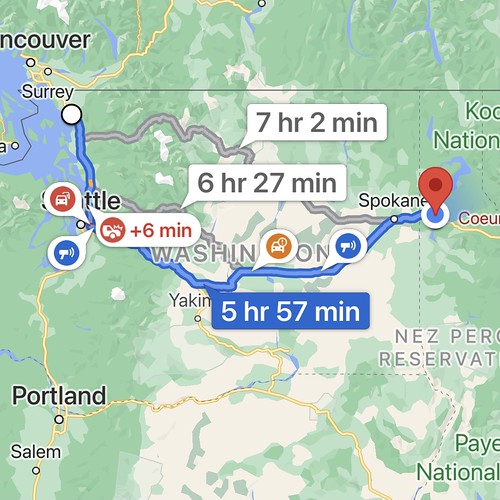 And if you’re ever in Coeur d’Alene? The folks at the Trails End Brewery were quite welcoming and had a decent Altbier-inspired ale that I’d recommend.

After Coeur d’Alene, I figured something on the order of eight hours worth of driving seemed about right. That would put me in Billings, Montana. 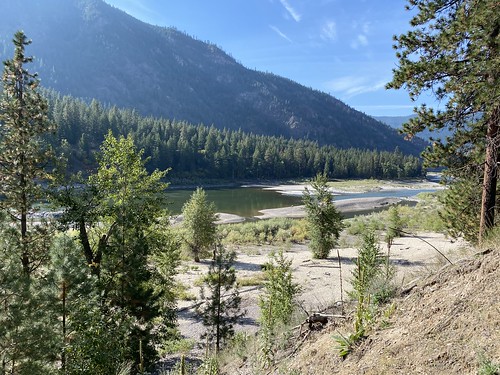 That’s somewhere along the Clark Fork River. Montana is beautiful. Wilderness everywhere. I want to come back and explore more of it.

I stopped briefly in Bozeman to stretch my legs and get a beer. Then finally push on to Billings where I stopped for the night and discovered the By All Means brewery which (1) had an amazing mole cauliflower taco on the menu and (2) some pretty innovative beers AND (3) was right next to a Get Air trampoline park which made me super homesick for BBCO. 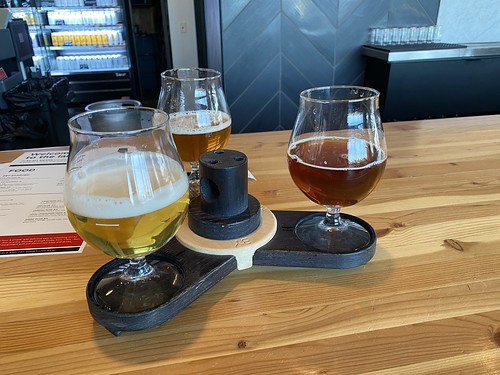 They hooked me up nicely. Shout out to the hospitality there in Billings, even if my sample size was admittedly small.

A little more ambitious this time. The wide open spaces out here… they require a certain focus and stamina to get through them. Plus everything is so g.d. far apart. And no signal means no Spotify so you better make sure you used that hotel Wi-Fi to download a few podcast episodes.5 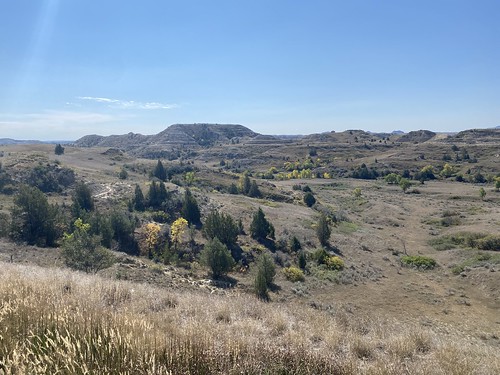 Anyway: Little Missouri National Grasslands (and other so-called badlands) sure are a fascinating sight, and worth stopping for.

This is where the drive turns into a slog. Fargo, North Dakota being right on the border with Minnesota means that I’m in the car barely 20 minutes before crossing over and then suddenly… fog. And when the fog lifts? There’s not really much to see. Minnesota flew by. And while I remember stopping for lunch in Wisconsin, I couldn’t tell you much about what I saw. Many linear miles of corn? Scrubby forests? 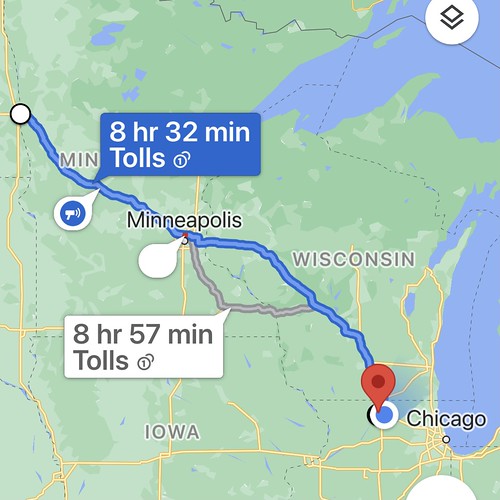 Definitely feeling antsy at this point. Definitely ready to be done with the driving. I tried to get an early enough start that I might get past Chicago and its suburbs and any of its associated rush hour traffic but… that calculation wasn’t my best and I still managed to hit some stop-and-go.

But again… this leg was all Midwest highway views and none of the majestic wilderness of Montana and North Dakota. On the other hand, I was going to end my day’s driving in Erie, Pennsylvania — and I was starting to feel very close to home.6

Home stretch! If I’d stuck to the highways I probably could have done the last leg blindfolded and with one hand tied behind the seat. But instead I trusted my fate to Google Maps which took me on the most sparse and perilous back roads that upstate New York has to offer. But I won’t complain beyond that because then I got this: 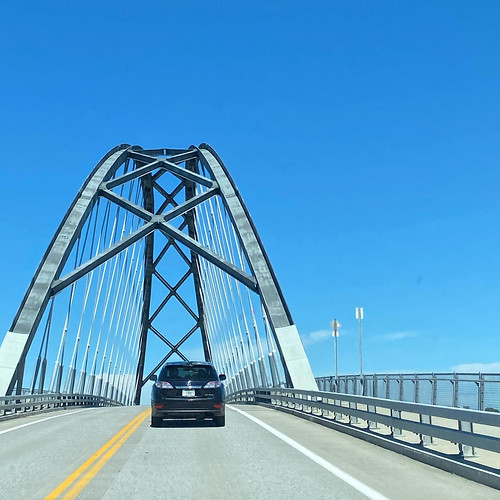 Champlain Bridge, y’all. And even though it had been about 7 hours since I’d eaten anything and I was practically running on fumes, I also knew I could make it to Vergennes where I could definitely get a bite to eat and a proper Vermont beer. 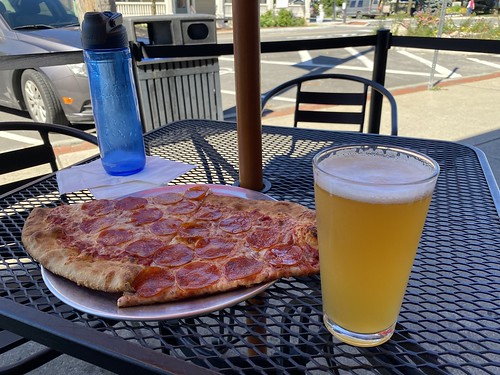 As the line from that Richard Scarry book goes: “Back. Safe. Home again.”

Long couple of days. But I made it.

3 Responses to the long drive home