I don’t know that I’ve ever had a real actual true Trappist Single. There was St. Bernardus Extra 4 from our study group but… that seemed an unsatisfying answer, that singular data point. So what motivated this particular brew was two-fold: first, that I needed a glorified starter (hence the name) for a significantly bigger Trappist-inspired beer to follow, and second, to see if I could brew a serviceable Trappist Single. That brings us to Glorified:

To the latter point, I don’t know that I would have necessarily made a Trappist Single if it didn’t seem like it was in service of the former. I’d been working on a novel-feeling1 beer idea (“Belgian Red Strong?”) that was planned to be somewhat high gravity and, all things considered, the sensible thing to do seemed like it would be to brew a low (“lower”) gravity beer with the same yeast. Obviously a Trappist Single was just the what the doctor ordered here.

A couple days ahead of time, I got a 1.25 L starter going. BeerSmith estimated that this would give me the 155 billion cells or so that I would need for my fermentation. That did its turn on the stir plate for about two days and then I got down to the business.

This brew day was a bit of a study in improvising and quick-thinking.
lled
I figured that I would mill my grains while the strike water came up to temperature. But the first mill didn’t seem to be crushing and I had to quickly switch over to the other mill. I quickly reset the gap to the second smallest preset2 and got everything crushed. (Though there was that pause in the middle where the drill over-heated and I had to let it cool off.)

In the meantime, the strike water had over-shot the target temperature and I had to add cool water about one quart at a time until I got it down to where it needed to be. I mashed in at 150°F and ducked into the kitchen to begin heating the water for the second infusion. 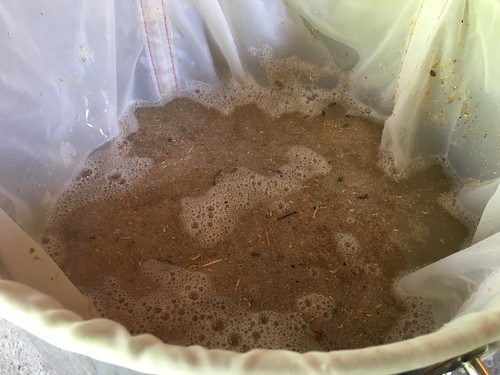 When I added the second infusion, I once again over-shot the temperature. The thermometer measured close to 170°F — so once again I added cool water one quart at a time until I got it down to a more appropriate (but still note quite right) 166°F.

When the timer went off, I pulled the bag and squeezed and measured a 1.040 gravity. This was a bit high from the BeerSmith estimate, but then again — so was the volume (6.5 rather than 6). That said, now I was inexplicably (what with the extra water in the mash) high on gravity instead of volume. If anything, I figured that I would err on the side of hitting gravity at the expense of volume here. 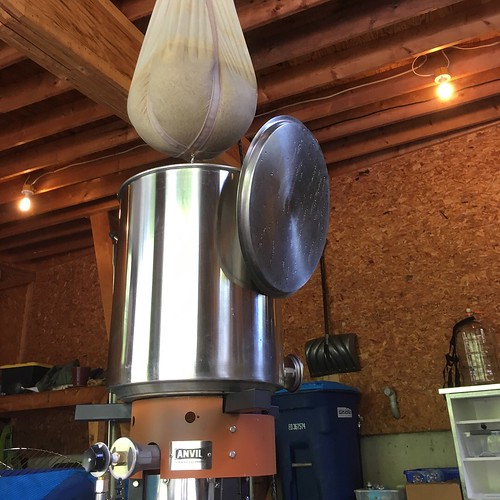 I got the flame going again, added my hops, added my sugar and… got to chilling. (Aside: for some reason, this boil was quite foamy and this was the first time I felt compelled to use FermCap in the kettle.)

When everything was chilled and measured, I had 5.5 gallons in the kettle at 1.057. In other words, the opposite of what I’d hoped to do. 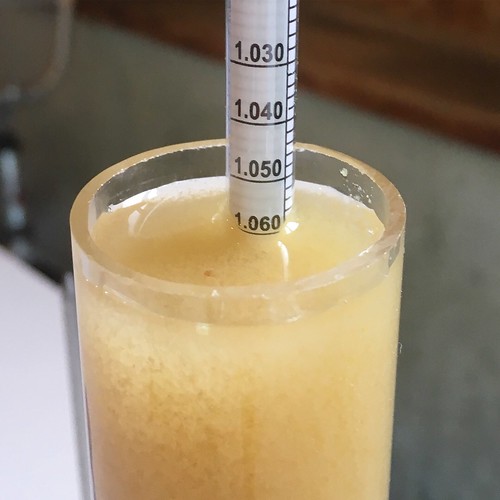 I shrugged my shoulders, took my notes (focusing on just how fast that boil-off rate was), and got my yeast pitched.

A Brief Aside About That Boil-Off Rate

It’s worth noting that this was my third time brewing out in the garage with heat from my Anvil burner. Knowing that first time how much more heat it throws than my stove top (even when doubled up), I made certain to take notes about pre- and post-boil volumes, as well as the length of the boil. Given my readings over the first two brews, it seemed that the evidence pointed to a 1.2 gallon-per-hour rate. So that’s what I planned for. Imagine my surprise when this worked out to be more like 1.7 gallons-per-hour. Boiling off that much faster would certainly explain how I ended up with a more concentrated wort. Nevertheless, it was so far off my expectation that I didn’t know what to do with the observation.

So I filed it away to compare with future brews. Didn’t seem like I could do anything else.

The carboy went into the fermentor with yeast pitched at 65.2°F; I set the controller to 65±1°F.

Active fermentation was happening by +10 hours.

Then I basically ignored this for over a week. When I came back to it at +211 hours, temperatures were still holding steady, but there was little activity in the blow-off bucket. I gave it a gravity reading about a day later and got 1.011 — which would turn out to be the final gravity, though I was hoping it would drop as low as 1.006 like BeerSmith predicted.

But then again BeerSmith predicted an original gravity almost 9 points lower so… I re-ran some numbers through BeerSmith and came up with a revised estimated final gravity of 1.008. A couple days later (after 2.5 tsp yeast energizer and a rest at 70±1°F) and the gravity was still sitting at 1.011. I decided not to fuss with it further went to package it.

It’s certainly an enjoyable beer — but I don’t know how close I got to a “true” Trappist Single. 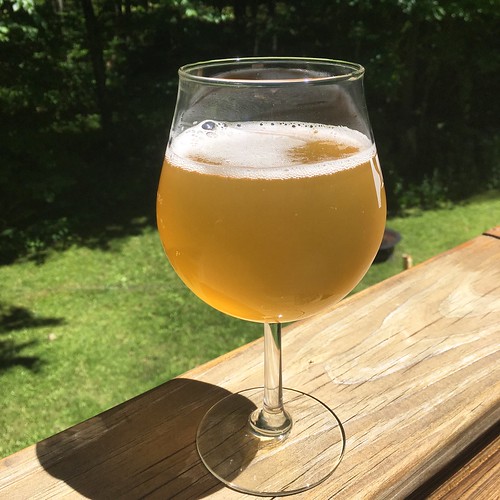 AROMA. Leads with a prominent though moderate ester that evokes pear. There’s also a low spicy phenolic note from fermentation. Hop character is moderately low and floral. Malts come across as lightly sweet and biscuity with hints of honey around the edges.

APPEARANCE. The color is a pale gold. There is a significant chill haze that takes a long time to clear. The head is a moderate size with fine white bubbles and average retention. (The chill haze I could live with but the head is disappointing.)

FLAVOR. Malts present with moderate biscuit and light honey; there is some back-of-the-mouth huskiness, but it’s very low and not distracting. Moderately low bitterness. Moderately floral hop flavor. The pear ester echoes from the aroma with moderately-light intensity, but isn’t nearly as prominent. The fermentation character is accompanied by a light clove-like phenolic spice. The balance goes slightly toward the bitterness. It finishes dry, with the honey character teasing around the edges of that.

MOUTHFEEL. Medium-light body. Medium carbonation. No significant alcohol warming. No significant creaminess. Astringency is just at threshold for me; very mild and not distracting. Finishes quite dry.

OVERALL IMPRESSION. A good, maybe even very good example of the style — at least as it’s written up in the style guide. There are several by-the-numbers qualities that I check off here as “appropriate” but they don’t quite marry. This isn’t to say that it’s one-dimensional or a hot mess, just that it’s decidedly “not excellent”. The fermentation qualities are (in my opinion) the strongest aspect of this beer. Meanwhile, I suspect that the mishaps during the mash are what did the most damage. It also seemed under-carbonated to me, which was a surprise given that it got so much corn sugar and that it was allowed (realistically) about 3 weeks to work up that CO₂. As for next time…

Overall, I’m not sure that I nailed the style, but I’ll probably still enter it into competition to see how it does. But let’s not forget that it’s also enjoyable to drink — and so I’m in no position to disparage this batch by any means.

The all-grain (BIAB) recipe for Glorified is as follows: