A project I’d long considered since making that first batch: a little honey and a little grape must gets you a pyment. And that’s what gives us Partial Shade:

I’d been putting off making a pyment in part because of the expense. Decent honey by itself can be a significant expense on a per-pound basis (i.e., compared to grain) — to say nothing of “the good stuff”. Add in the must, even some (essentially) mass-produced concentrates, and you’re looking at a fairly pricey brew day.

The other piece of it was a whole bunch of uncertainty. I was having a hard time getting reliable numbers about the different musts and concentrates. What was their sugar content? Was that intended to be diluted? If so, using what method?

Given that my 2018 Noonan Competition winnings included a Midwest Supplies gift card, I decided to stop ruminating and just go for it. I assembled a formula with some Cabernet Sauvignon must concentrate, some honey, and a little of my favorite dried yeast — Belle Saison!

In early June, I assembled my kit and got to work. I was targeting a 3 gallon batch1 and heated up my water to about 110°F. I ran off about 2 gallons of water to mix up the honey for the must in a bucket. I opened the can of Cabernet Sauvignon concentrate and added that to the carboy. I ran off the honey must into the carboy as well. Lastly I topped off with about a half gallon of water, dosed it 3 crushed Campden tablets, and gave it a good shake. 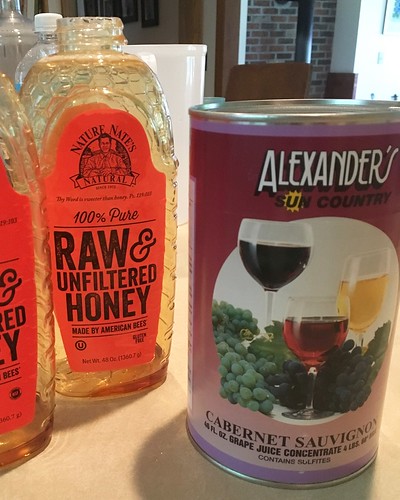 I took gravity and discovered this was a whopping 1.123 — a solid 16 points higher than the O.G. predicted by BeerSmith. OK (I told myself) it’ll just be a really big mead.2 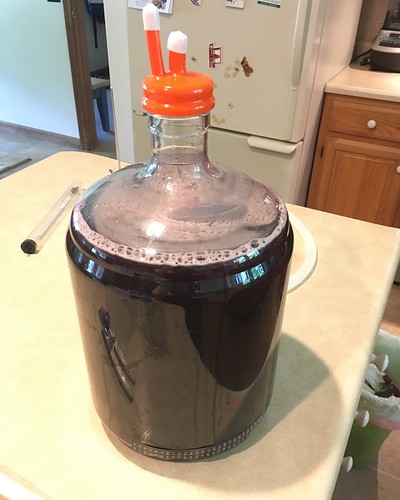 After letting the sulfites do their thing for 24 hours, I rehydrated a single sachet (11.5 g) of Belle Saison and pitched.

I did not follow my usual custom of adding a big nutrient addition at the beginning of fermentation. However, I did follow a staggered nutrient addition schedule, dosing the fermenting must with 1.2 g of diammonium phosphate (DAP) and 1.5 g of Fermaid-K at 0 hours, at 48 hours, 96 hours, and lastly at 144 hours.

I let it ferment nice and slow for about two weeks before I took the first hydrometer reading: 1.024. That’s odd, I thought, noting that BeerSmith had estimated an F.G. of 1.033. Not all that strange, given what I’ve observed with Belle Saison in the past. (As an aside, the sample was tasting a little young still, but I liked how it was developing.)

I took another hydrometer reading five days later, expecting it to have stabilized. Instead, the gravity had come down to 1.014. Surely that (I told myself) would be the finishing gravity — it was now at about 14.9% and above the yeast’s published alcohol tolerance.

But then three days later it had dropped to 1.009. I almost couldn’t believe it. Convincing myself that that was the F.G., I racked off the lees to let it condition and clarify. “Don’t even think about it for a month,” I said to myself.

And I stayed true to that. But come August, you better believe I took another couple gravity readings to make sure that it had stabilized. And it had. At 1.001. 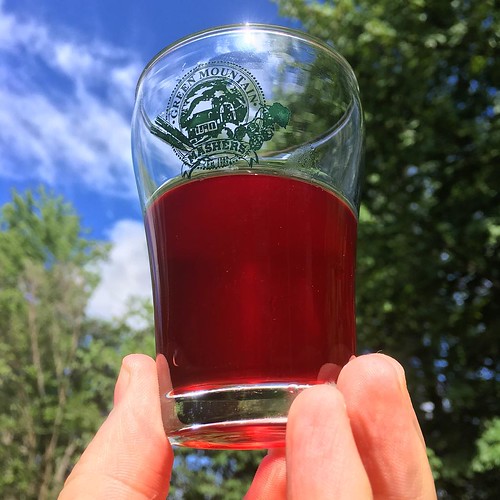 Not bad for a first attempt? 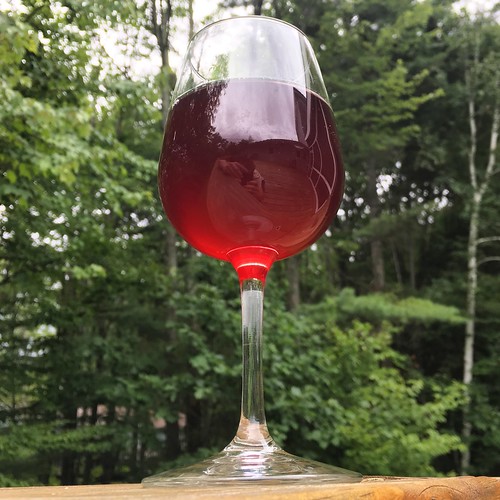 AROMA. Dominated by red fruits: medium-intensity strawberry and raspberry, moderate plum. A light honey element that is somewhat sweet and hints of floral. Moderate alcohol is evident on the nose.

FLAVOR. Leads with mild honey sweetness, with some floral elements presenting retronasally. Mid-palate fruit notes like strawberry (moderate), plum jam (mild), and blackberry (mild). Significant (but not unpleasant) alcohol, though it pulls things slightly out-of-balance. There’s a mild acidity (albeit no sourness) but no significant tannins.

MOUTHFEEL. Medium-light body (“heavier” in the mouth than I’d expected). Appropriately still. Significant alcohol warming that lingers. I find it pleasant, but it seems slightly out-of-balance.

OVERALL IMPRESSION. Reads like a young red wine with some honey elements. Alcohol seems a little high and washes out some of the other flavors, but it’s not “hot” like fusels and I suspect it will smooth out over time. I’m enjoying it, but I think there’s some room for improvement:

I’ll set a few aside for competition to see how they do. I suspect this is one that will not do well young but will improve substantially after some cellaring. That said, it’ll be difficult for me not to drink them all.

The recipe for Partial Shade is as follows: