Long-time readers know that most of my meads are “beer-strength” and carbonated — craft meads, to borrow a phrase. Oh sure, there was that pyment, and that 2017 batch that got split up several ways but … craft meads tend to be my wheelhouse. But this honey was special, so Ned isn’t a craft meads but something more … traditional.1

Before we left Vermont, a friend from the homebrew club gave me 6 lb. of honey from his bees. We were members of the same BJCP study group and so spent many (50-ish?) hours together talking beers and meads. He kept saying he was going to give me a few pounds. Then the last time I saw him, he came through with a half-gallon Ball jar. “I guess it’ll have to be a going away present now.”

I enclosed the jar in the biggest Ziploc I could find and then padded it well, snug into a sealed plastic bin of other mostly-shelf-stable brewing ingredients etc. It was a gamble but… I couldn’t very well bring a bubbling fermentor on the plane, could I?2

Somewhat miraculously, the honey survived the cross-country transit to Seattle. Then in October, the time had come to assemble a small batch with that honey.3

Given the special nature of this honey, I wanted to craft a recipe where it would be the star of the show. No fruit, no spices, no expressive yeast. And I wanted it to be “wine-strength” (as opposed to my usual 6-8% craft meads). And lastly, I wanted this one to be still.

Should be easy enough: some water and then the honey and then pitch.

Speaking of the honey… 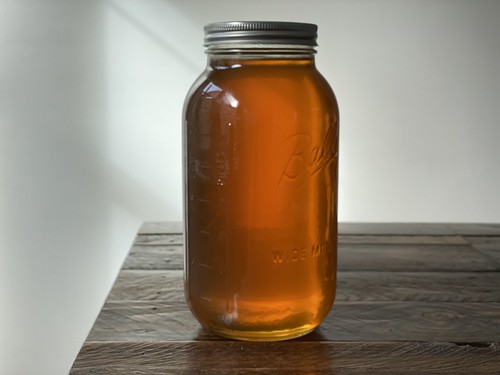 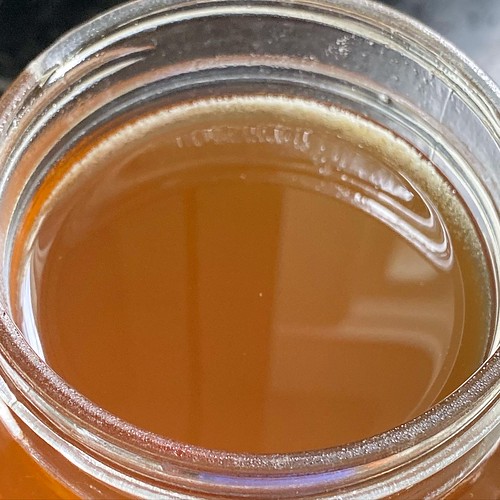 Then a little hot water into the Ball jar to try and dislodge whatever other honey might have tried to cling to the sides. Then top off to… 2.25 gallons. 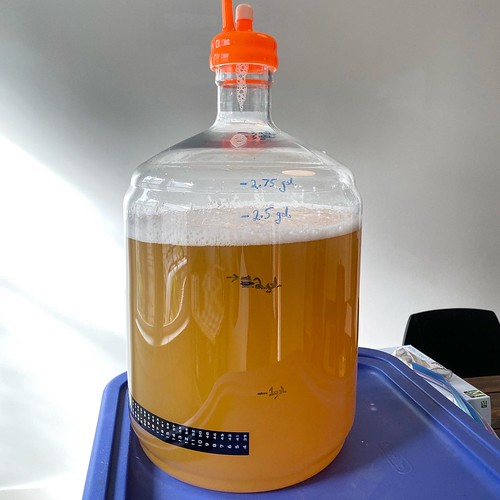 While the must cooled, I rehydrated a pack of 71B (Narbonne) with Go-Ferm. When the must had cooled to <74ºF, I pitched.

I followed along with a fairly standard staggered nutrient additon schedule:

But otherwise: try to hang back and be patient and let the yeast do their thing.

That said, I’ll also admit that I took the first refractometer reading at the 120 hour mark.

Patience won out though, and Ned was on the lees for 26 days while I waited to be confident that it had reached terminal gravity.

Then I racked it off the lees, and onto some oak cubes. 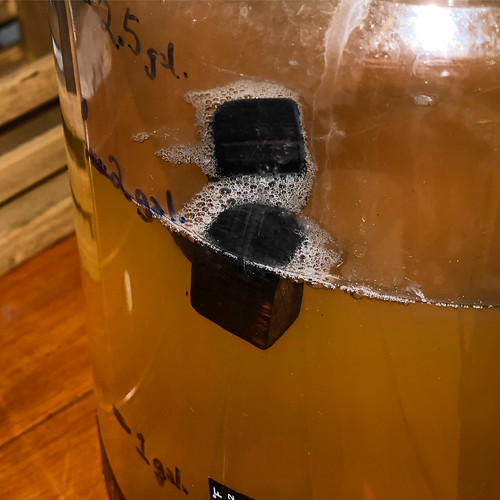 These oak cubes were also special. They were a gift from another Vermont friend, and had previously been used to age some of his mead which had been… [coughs] distilled to its essence? Anyway, they had a nice medium toast char on them and just a hint of spirit aroma.

So Ned sat on those oak cubes for another two and a half months before going into bottles.

Despite being a three-time Vermont Mead Maker of the Year, I still don’t really know if I’m making mead or just getting lucky. And as I work on my mead judging skills, that’s only made it equally hard to tell.

That said, I think this one is at least serviceable. 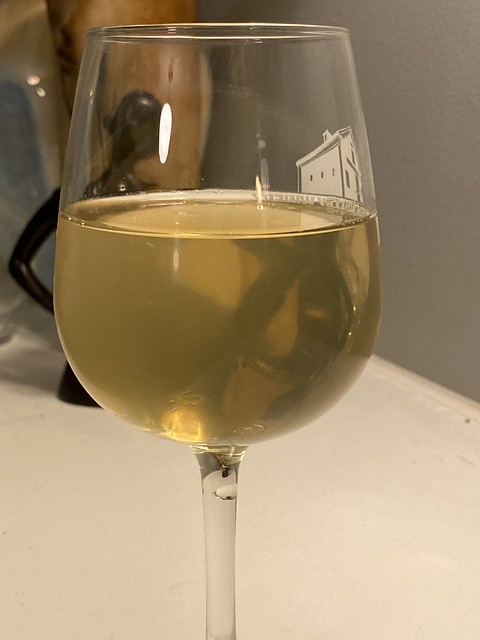 Given what I have learned about mead judging though, I thought it might be worthwhile to evaluate this mead at two different serving temperatures.

APPEARANCE. Straw in color. Not quite brilliant clarity — if this were a beer, I would be pondering if it had chill haze. Moderately thin legs. Totally still.

FLAVOR. Moderately low honey flavor; there’s a suggestion of honey sweetness, and floral tones retronasally. The actual sweetness level is decided low, with an off-dry finish — however, the vanilla notes evoke sweet sensations. Acidity is moderately low and mostly presents toward the rear of the palate as a slight prickliness. Tannins are medium-low and firm throughout. Alcohol is also on the medium-low, perceptible as a soft warming impression and a faint perfumy character retronasally. The mead has a medium-low body with pleasing viscosity. No carbonation whatsoever. The mead has a semi-sweet finish that fades fast into a mild tartness before trailing off into a lengthy oaky-vanilla aftertaste.

OVERALL IMPRESSION. At this temperature, the mead seems somewhat dull in places — and I wonder if there wasn’t some oxidation? The tannins provide structure where the acidity is otherwise low — but they also seem too low. (This is the opposite of what I would expect here.) Fairly neutral honey flavors overall — not especially distinct, but it’s fine, and pleasant to drink.

BOUQUET/AROMA. Medium-low honey, with a character that is both off-sweet and evocative of dried flowers. Alcohol is on the low side of medium, and somewhat perfumy. There are some moderate esters present, with an impression of pears and raspberries. Secondary notes of vanilla and almond and toast from another room.

FLAVOR. Medium-low honey flavors; off-sweet with a fresh floral retronasal impression. Medium-low sweetness; honey-like, but decorated with vanilla. Mild tartness, particularly in the front of the palate. Moderately strong tannins; firm and anchoring. Moderate alcohol impression; enough warming to notice, and with a perfumy retronasal character. No carbonation. Moderately light body. Off-sweet finish still manages to give a dry impression, with fast-fading acidity, and a long aftertaste of oak and vanilla. Hints of butterscotch sneak in here and there.

OVERALL IMPRESSION. (Having had it at both temperatures… drinks better warmer.) More of the “complexity” elements are more evident, especially with respect to the oaking. I still don’t know that it would be an award-winner4 but there are also no obvious faults to my palate, and it’s a pleasing mead to drink.

The recipe for Ned is as follows:

Start with the Seattle municipal water profile as a base: carbon filter, add calcium chloride at a rate of 0.57 g/gal.