Long time readers of this blog will know from the name what’s in store here. When I call a beer “Hoarder Intervention”, it’s because it’s a “junk drawer” beer — as in: me cleaning out whatever junk is leftover. “What the hell can I do with this?” But whereas #1 and #2 required some supplementation from the local HBS, Hoarder Intervention #3 was brewed simply with what I had on-hand.

…which is to say that I spent $0 to brew this beer except gallons of water, propane, and my time.

I looked at the 5 lb. of Skagit Valley NZ-150 pale malt I had from my judge’s goodie bag from Ein Prosit and thought: “Not enough to brew a SMASH but…”1 A 50/50 blend with my stock of Briess 2-row, then some of the Warrior and/or Chinook in the freezer, and then pick a dry strain from the crisper drawer.

It isn’t that I put zero effort into this beer, but I honestly don’t know that I’ve put less effort into any others.2 I had some base malts and some “leftover” hops, and some yeast I could throw at it. All that’s left was water so… carbon filter and let BeerSmith tell you what you need for “Yellow Dry”.

Collect water, hit it with salts, crush grain… and we’re off! 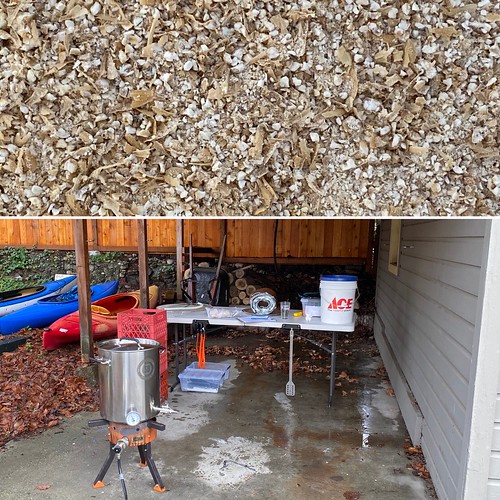 (It’s worth mentioning that although technically this brew day was before I ran my brew house efficiency post, I’d run a bunch of those numbers already and was trying to put part of my theories to the test!)3

I mashed in around 11:00am at 152ºF and just walked away for 90 minutes. (Hoarder Intervention style — don’t fuss with things, if you don’t have to.)4 After that I pulled the bag, did my squeeze, and ran a little post-mash science. Approximately 1.049 wort gravity pre-boil, and about 6.2 gallons of volume. 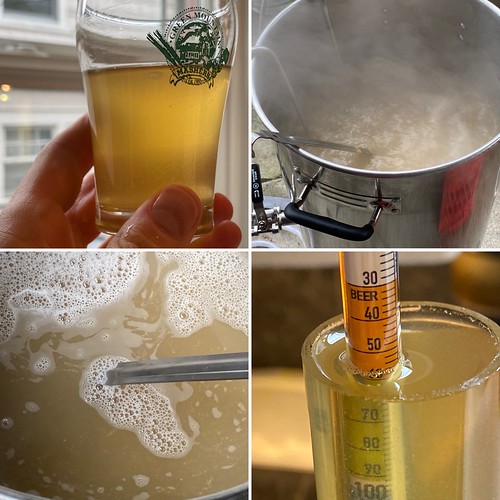 Still some open questions about my brew space ergonomics, and spending 15 minutes to chill 5 gallons that I only spent 30 minutes boiling seems… silly. But overall, a successful brew day.

As I was planning on making this an (unconventional) lager, I set my controller to 52±1ºF and let the chest freezer bring the wort temperature down the rest of the way. I’d looked through my stash of dry yeast packets in the my crisper drawer and ultimately settled on Diamond:5 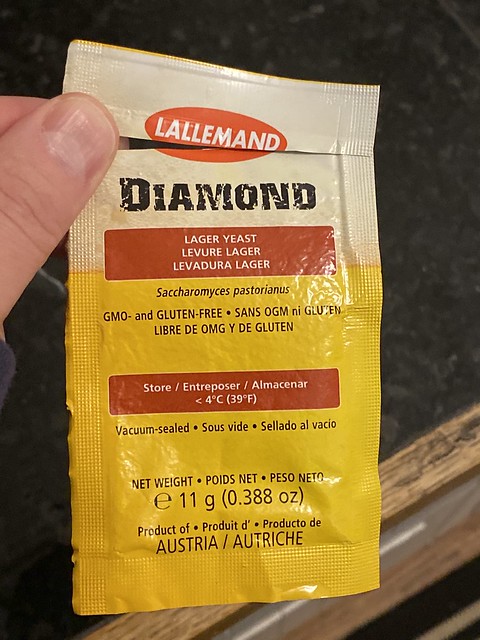 I’d never brewed with it before, but it seemed like a fairly straightforward less-than-fussy lager strain. And given the Hoarder Intervention philosophy… this seemed like the perfect opportunity to roll the dice on it.

I rehydrated (albeit not with GoFerm) and pitched a single sachet — as that was the only sachet I had. Then I gave it oh… 48 hours or so to prove to me that it could do the job.

And by the 48 hour mark, I had enough activity in the blow-off bucket to satisfy me that it was fermenting away.

And though I was blasé about the recipe design and brew day, I got pretty attentive on the fermentation side. Semi-frequent refractometer readings, watching it come down — trying to follow that modified Narziss method.

And when it got down to past ⅔ of the estimated attenuation, I ramped up the temperature (approx. +5ºF every 12 hours until we hit 68±1ºF) to encourage complete attenuation and finish metabolizing the acetaldehyde and diacetyl etc.

What I did not do was cold crash.

Even though I added gelatin in the keg.

And then did some crank-and-shake carbonation for the second time ever.6

Then hey — I think I have beer to drink?

Even after letting it settle out… didn’t exactly clear up like I thought it might.7 And anyway, it’s a bit of a … non-conformist beer anyway so… at least it’s drinkable?

APPEARANCE. Color is darker than straw but paler than yellow. Tall head of white, dense foam with very good persistence. Hazy, but not NEIPA hazy. (I can see my fingers through the beer but they’re fuzzy.)

FLAVOR. Soft grainy-sweet malt throughout; moderately low overall intensity. Medium-low hop flavors follow aroma: citrus (orange over grapefruit) with a little pine; floral elements present retronasally. Medium-low bitterness. No significant yeast-derived flavors. Again (as with aroma) there is a hard-to-place character that doesn’t overtly smack of any particular off-flavor — and again I might suspect a mix of just-at-threshold chlorophenols and/or acetaldehyde, but it’s hard to be sure. Finishes with the balance slightly toward the malt, but then a resurgence of the hop character in the aftertaste.

MOUTHFEEL. Medium-light body. Medium-high carbonation; a bit prickly in the finish. No significant alcohol warmth. No creaminess. No noticeable astringency.

OVERALL IMPRESSION. Doing the tasting notes for this beer, I am reminded of the time Erin had us blind-taste a Natty Daddy and attempt to place it in a BJCP category. “Where do you even put this beer?” And the most generous thing I can think to say about it is: “Not nearly as bad for the level of effort I put into it.” (Which again… practically zero.)

Stylistic feedback is hard when you don’t have a style to begin with. As a 2A. International Pale Lager or 1B. American Lager — entirely too much flavor. Plus the haze. Malt and hop character take it right out of all the Czech and German styles. Plus the haze. Just about everything else is ales which … no significant esters. But could reasonably pass for an 18A. Blonde Ale. What’s left? 34B. Mixed-Style Beer? (Mix of what though?) 34C. Experimental Beer? (Last refuge of the brewer scoundrel?)

Technically… that hard-to-place off-character is bugging me, and is the main thing keeping it at “just OK” as opposed to “actually decent”. I think it’s easy to point the finger at yeast here … perhaps stressed before they were even pitched. It’s enough to be distracting. (Not that I won’t finish the keg.)

TL;DR: It doesn’t help that it doesn’t have a style space, nor does it help that the faults are just at-threshold — there’s enough of a gap here between the beer it is and a good beer that I couldn’t in good conscience score it higher than low 20s.

And anyway it’s not worth commenting on changes for next time because … it’s a Hoarder Intervention. Realistically there is no next time. Though I might want to double-check on my dry yeast stash.8

Whatever. It drinks like a so-so beer and that’s good enough for a zero-effort homebrew.

The all-grain (BIAB) recipe for Hoarder Intervention #3 is as follows: