The second1 in this “junk drawer” series of “leftover ingredient” beers. After the (relative) success of #1, I looked in on what odds-and-ends were kicking around and applied my imagination toward Hoarder Intervention #2.

Looking in my bin, I saw that I had two more malt samples leftover from the BYO Boot Camp I’d attended.2 Eight ounces each of Patagonia Perla Negra (a huskless dark malt) and a Caramel 170L. 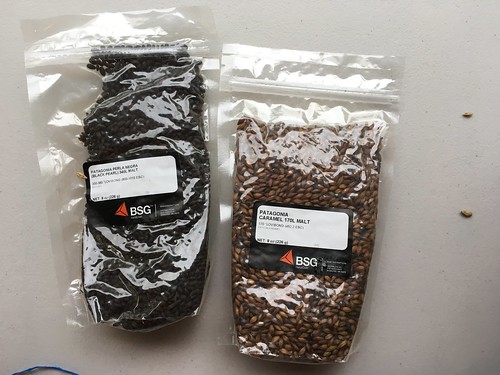 Looking at those two alone, I’m thinking to myself: it’s gotta be something dark. Something in the porter/stout space? Black or brown IPA? American Brown Ale seemed to be calling my name here though.

On to the hops! Of which I had plenty stashed in the freezer and refrigerator. My foolish (??) bulk buy at a store clearance had left me flush with a number of 1 lb. bags, all of which were in some state of… partial consumption. Given my choice of style, I figured I could get away with some Galena for bittering and then a big charge of Centennial at flame-out — maybe dry hop with it as well.

That left yeast which, being out of “leftover” dry packets, I figured if I had to get base malt anyway, I’d just grab an American strain (maybe a “do-over” with 1272?) and be done with it.

It would be easy to say that, aside from trying to shorten up some of the stages, it was a pretty typical brew day. Temperatures were cooling off from those of the summer, and I could really feel it in the early part of the morning. Nevertheless, collected my strike water, and got the grain milled. 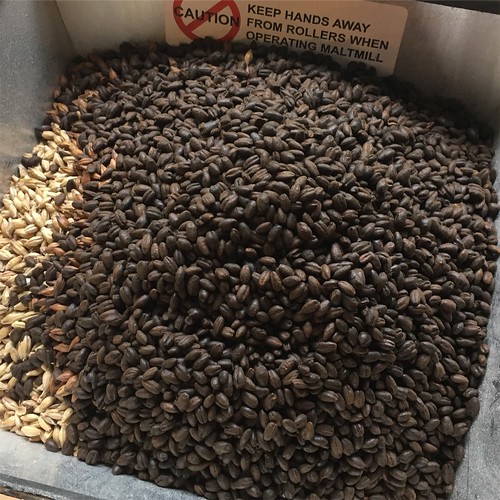 The original mash schedule called for a single infusion with 75 minute rest. I decided to cut that short after 60 minutes, figuring if this is a just-for-fun “junk drawer” beer anyway… it’s OK to bevel a few corners.

Meanwhile, as it was mashing, an idea came to me. Given that these hops were all at least a year old3, maybe I could play around with BeerSmith’s Hop Age tool to see what kind of adjustments I would need to hit my IBU targets. (A little more Galena plus a pinch of Centennial at the start of the boil would do the trick.) 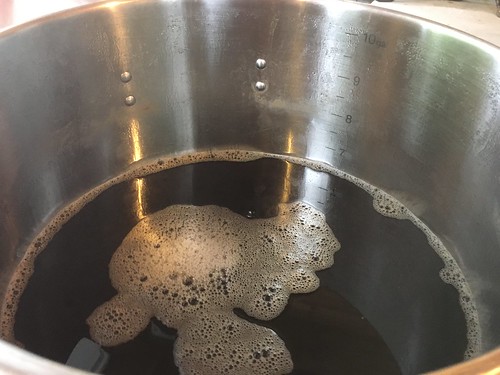 In part because it was a “Hoarder Intervention” beer, and in part because I was low on propane, I planned for a 30 minute boil. Which was uneventful. Bittering charge in. Set the timer. Timer goes off. Start chilling and add knock-out hops. Chill chill chill and take gravity: 1.049 after calibration and offset adjustments. 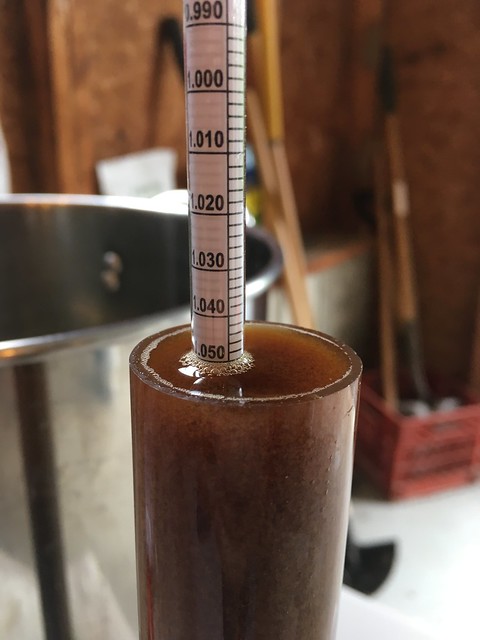 I must say… it turned out significantly darker than I thought. 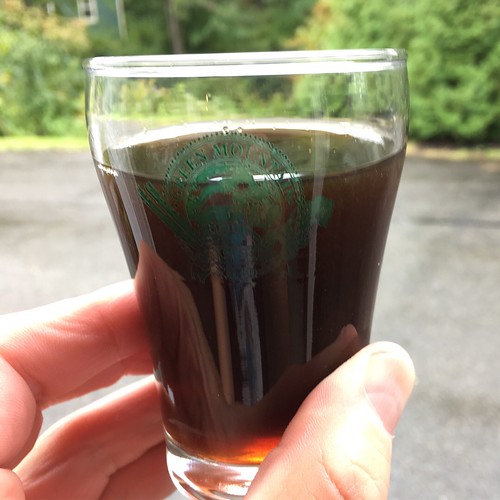 This fermentation saw the return of the decanted starter. When the temperature got down to below 65°F, I decanted off the supernatant down to about 200 ml of slurry and pitched some 1272, locking in the controller at 62±1°F.

Things were pretty boring for a few days after that. Fermentation-related activity was visible in the airlock a few hours later, and while it was steady, it never really got vigorous. At +54 hours, I started bumping the controller +1°F every 12 hours or so until I got up to 65±1°F.

I took the first gravity reading at +78 hours, sighting 6.4°Bx in the refractometer (so probably about 1.015?). Then another at +125 (6°Bx = 1.012) and another at +174 (6°Bx = 1.012). With a consistent refractometer reading, I pulled a larger sample for a hydrometer reading which confirmed a finishing gravity of 1.012. I added my dry hops (2½ oz. Centennial, wherein I got to “test drive” the little steel sleeve to keep them contained) and let those convey their citrusy essence for a few days.

Then — and again, this being a “low stakes” beer, so why not experiment? — I decided to skip the cold crash and only fine with gelatin. The idea here was that, because I ferment in a chest freezer, it’s awkward to get a full fermentor out, and nearly impossible to do so without disturbing the sediment. Every time that I cold crash and fine, I have that awkward moment of clumsily removing the fermentor, trying (as gingerly as possible) to set it down gently somewhere, and then still having to wait another 24-ish hours for things to settle down again.

Now, I’d heard that gelatin fining only works “well” in combination with a cold crashed beer but… why not try it without? Just to see?

So I pulled the Brew Bucket out of the chamber (as clumsy and awkward as ever), mixed up my gelatin, and added that in. Two days later, I transferred (“as closed as possible with my gear”) to a keg and got it into a keg for some force carbonation. 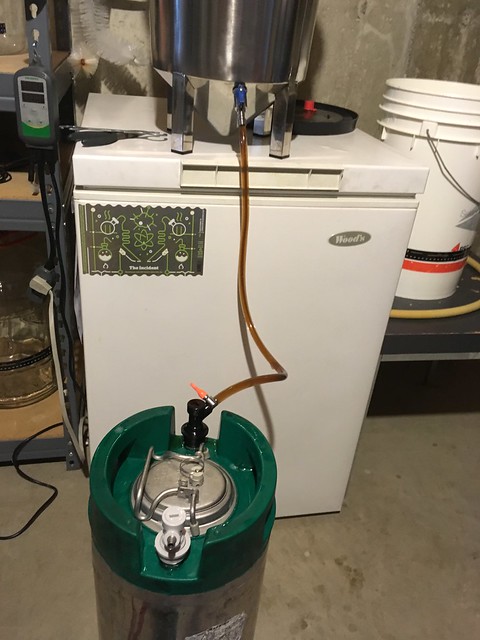 I’ll drink this. Like #1, I’m not 100% sure where to put it in the style space but it’s certainly drinkable.

APPEARANCE. Very dark brown, bordering on black (somewhere 34+ on the SRM scale?) but with mahogany highlights and a deep ruby red against the light. (Backlit, this beer is probably more in the 22-27 SRM range by my eye.) Good clarity (again: hold it up to the light!) in spite of the dark color. Khaki head stood at least 2cm with loose foam. Good persistence, and pleasing lacing after it collapsed.

FLAVOR. Malts leads with a semi-sweet caramel note and toasted bread crust. Background notes of baker’s chocolate. Hop flavors present as medium grapefruit (with pith!) and light pine resin. Firm, medium-high bitterness. Definitely bitter in the balance, and maybe a little too much with respect to my original intent. Retronasal elements are low, but imply a chocolate-covered orange slice. No significant yeast contributions. No significant alcohol. Aftertaste tilts to a lingering low bitterness.

OVERALL IMPRESSION. A drinkable, sessionable dark ale with malt impressions evocative of chocolate and caramel and toast, and hops in the neighborhood of citrus and pine. Malt and hop impressions are about right for an American Brown Ale, but the bitterness is on the high side, and maybe too high. This might perform better as a Brown or Black IPA, though one at Session strength. Would be interesting to enter it into competition as both and see how it scored. As an American Brown, I’d probably score this one in the high 20s to low 30s; probably solidly mid-30s as a “Session Black IPA”?

That said, as a Session Black IPA, I would probably dry hop at a slightly higher rate to bring out those aromas more. As an American Brown, I’m thinking I should have backed off on the hops (especially to cut bitterness), and maybe put more emphasis on the malt (especially the caramel, and maybe something to introduce some nutty aspects); it’s good, but I think that would improve the balance. I’m glad I fermented the 1272 significantly cooler than last time; it seems to prefer the low-60s °F.

I’m also surprised at how well it cleared with the gelatin fining and an omitted cold crash. That’s a method worth trying again.

Overall, I’m pleased with how this turned out — especially given the fairly low level of effort.5 This will be a nice beer to have on draft going into the cooler autumn months.

The all-grain (BIAB) recipe for Hoarder Intervention #2 is as follows: