It had been too long. Mk. VIII was… summer of 2018!? Did all of 2019 slip by without a single batch of Honestatis? I suppose it’s possible — we were busy last year. But as 2019 closed out and I looked ahead to 2020, I committed to two seemingly opposed brew goals. The first? Brew at least six new-to-me styles. And the second? Start the year off strong with the triumphant return of Honestatis, the beer I’ve brewed more than any other:

I’ve quipped more than once that Honestatis was the beer I was born to drink. Enough smoke to know it’s a smoked beer, but not to overwhelm you. Rye enough to get a strong impression of its earthy/spicy qualities. Definite red color. The residual sweetness that the red color demands, but not cloying. Decidedly bitter, but not aggressively so, nor hoppy. A beer with enough complexity to be interesting, but not so much that you couldn’t just enjoy its simplicity.

And maybe only a beer that it’s creator could love?

Except that my friend Dan seems to have fallen in love with it, too?

Enough so that we collaborate on Mk. VII and managed a 42 in first round NHC 2018.

NOT TO BRAG OR ANYTHING.

So yeah, it was time to re-brew this bad boy…

Before we dive into the brew day details, there are a few details to get out of the way up front.

First, this was the triumphant return of 1332. I’d gotten spooked off of it after Prosody (Mosaic)1 — but it was time to conquer my fears, apply the knowledge I’d learned, and go back to my roots on this one.

Which is just as well because…

Secondly: I had to do a 1:1 swap of cherrywood smoked malt (which I’ve always used for this beer) with beechwood smoked malt — which was all that I could get my hands on without either inconveniencing myself or else compromising my values. So… rolling the dice on that.

Which was a gamble because…

I’d already committed to this being beer #1 of 2020, but in the January meeting of the North Seattle Homebrewers … I kind of threw down the gauntlet for a smoked beers duel. Kind of. Maybe. Definitely.

Cherrywood smoked malt or not (NOT) — the brew day must go on.

First things first: yeast — I’ve been spoiled by those Imperial Yeast packs so I finally dusted off my stir plate for my beloved 1332: 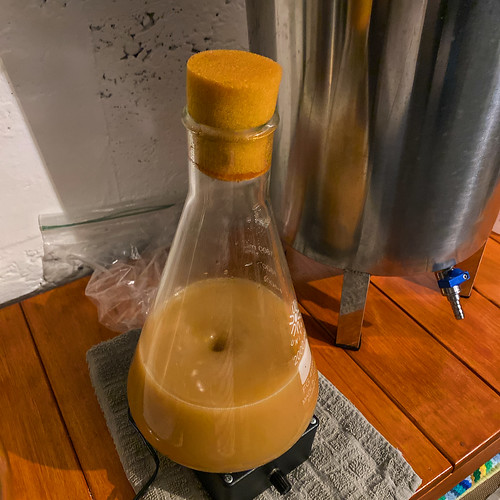 Morning of brew day came and… 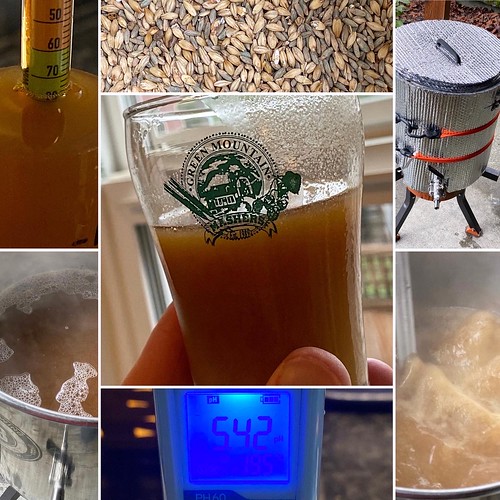 ASIDE: Mini-Retro on the Brew Day

While it went well overall… WTF is up with my brew house efficiency here? Regular readers will remember how I was trying to puzzle this out, only to learn of other potential complicating factors. Regardless, I stuck to my original conclusions and planned for a 65% brew house efficiency because my planned O.G. had ticked up over the 1.065 mark. But hey — that was ignoring the slope, and trying to attribute a kind of strict binary division. Meanwhile my actual BHE comes out as 77.1% which… significantly above all the estimates.

In other words: I’ve got more work to do there.

The beer was fermenting vigorously within hours.

Within a week things had settled down (blow-off bucket activity-wise) and so I swapped what I could, as safely as I could. (There was a lot of yeasty stuff in that blow-off bucket, by the way.)

Refractometer at this point was telling me 9.8ÂºBx which BeerSmith was converting to 1.016. Doubtful it was that low, but probably in the ballpark. Regardless — that tiny refractometer sample was tasting young and it needed more time to mature.

Two weeks after brew day, I draw off a hydrometer sample and prepare to package it. 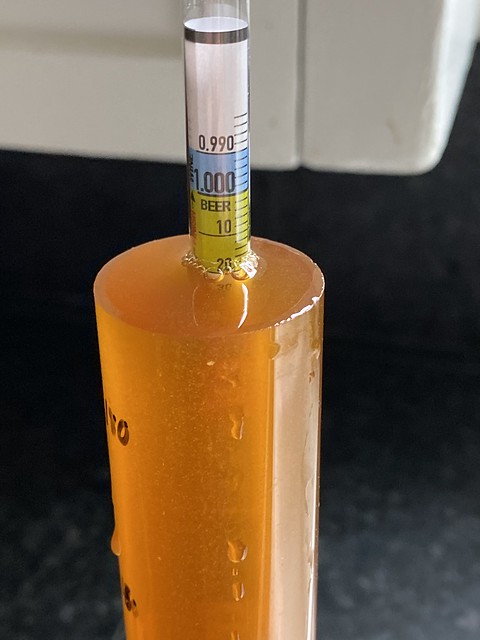 Wherein F.G. reads 1.017 and final ABV is something like 7.9%. Or as my notes put it: “that’s just what this beer wants to be.” And so into the keg it goes to carbonate and finish clearing.

I can tell the difference in the smoked malt with respect to the flavor contribution, but I still like it. (And it won!) 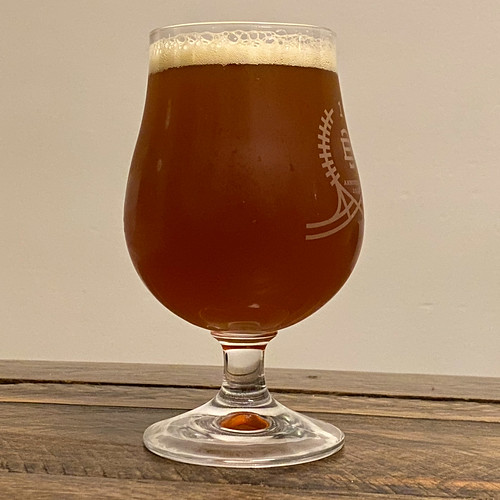 OVERALL IMPRESSION. For competition purposes… Very Good, maybe Excellent beer — but given what I want this beer to beâ€¦ I can tell that itâ€™s missing the Briess cherrywood smoked malt. That being said, it does a good job of bringing the smoke flavor front-and-center (as always) without hitting you over the head with it. My knocks/dings on this beer are all minor things â€” clarity and the detectable astringency, mostly. (To speak freely: this is a beer that Dan and I have gotten pretty well dialed-in and it’s… good. Itâ€™s just also that this is a pretty niche beer.)

Were I scoring it in competition? High 30s? 37? (Again: it’s a niche beer, but between my original vision and Dan’s tweaks… we have it more or less where we want it.)

Changes for next time? Get the Briess cherrywood smoked malt back. Otherwise I’m pretty happy with it. Maybe see if I can suss out some of the minor astringency and/or clarity concerns. I’m also glad I brought back the 1332 for this one. That said… I still think that a lager version might be interesting, especially after the 1007 experiment on Mk. VIII.

The all-grain (BIAB) recipe for Honestatis (Mk. IX) is as follows: