Two motivations at work here. The first, and probably more predictable of them: St. Patrick’s Day was imminent, and I wanted an Irish Stout on draft for the occasion. And the second? I wanted to round out the BJCP’s Category 15 beers.1 Thus was Murphy the Lucky Dog2 devised:

Come to think of it, there was a third motivation happening: I wanted to get a feel for how I might pull off some stovetop small batches in our still-new-to-us Seattle home. What better beer to try that out on?

Given the small batch size, I decided to forego a starter and just do a straight pitch from the smack pack. So on brew day, I did just that: smacked the pack of Wyeast 1084 and placed it on top of the refrigerator to puff up while I did everything else.

Milling went quick with roughly half as much grain as I’m accustomed to.

All the filtered water and salts were mixed together in my usual 10 gallon Spike kettle. I’d hoped that maybe ye olde starter kettle would give me enough volume but… alas! even for a “small” beer like this, it was just too small. 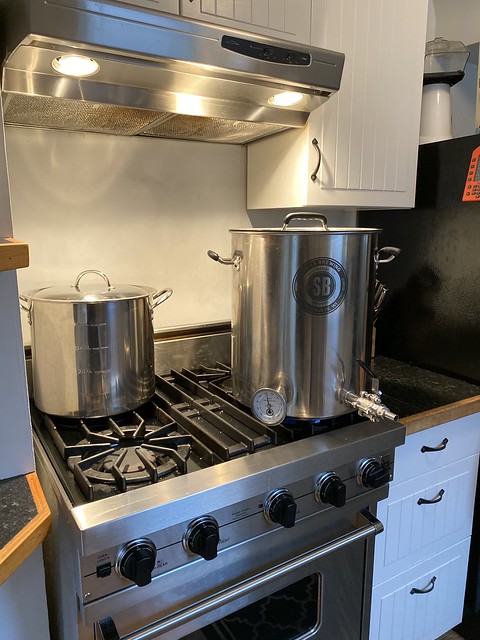 Got the flame going and mashed in… just a bit too high. Formulation called for 152.1ÂºF but there I was at 154.9ÂºF. Well, OK — I haven’t worried about such a small difference in mash temperature for a long time, so I decided not to worry about that now either. The mash pH read as 5.16 as of 15 minutes into the mash — maybe a little low? but unlikely a major concern. Let the rest of the mash run its course, finishing at 150.1ÂºF.

After the bag hoist and squeeze, kettle volume was reading 3.75 gal. with a specific gravity of 1.037 according to that (mischievous) refractometer. 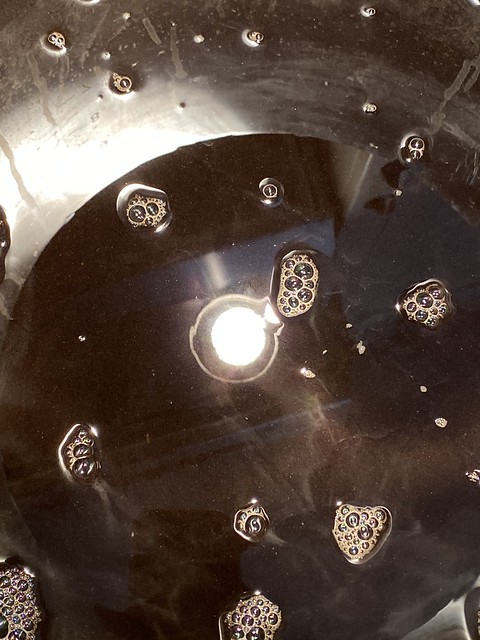 The rest is basically a chase scene: boil and add hops and flame out and chill3 and do some science: 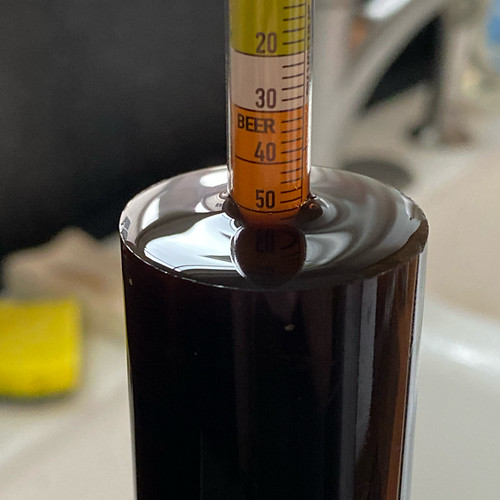 So… higher-than-planned gravity but lower-than-planned volume translates to a brewhouse efficiency that’s just shy of the plan and therefore… right on?

Brief Aside re: Brew Day Retro

From the strict perspective of evaluating the predictive power of the planned brewhouse efficiency it was on the one had very close, and on the other hand so far off. Planning for 3 gallons into the fermentor and getting only 2.5? That’s nearly 17% off on volume. Meanwhile, planning for an O.G. of 1.042 and getting an actual of 1.050? That’s about 19% over.

In other words… “Nearly nailed it in aggregate but… how about no?”

And I half-expected something like this. I was just starting to get used to how the numbers would shake out for my 5 gal. batch brew days on my system as I brewed outdoors. This was… completely different. And not only that, but I don’t think I’d ever brewed such a small batch in the 10 gal. kettle before.

Taking a moment to reflect on it, several things became clear. First, the amount of wort left behind in the kettle (with the trub) was going to be more-or-less constant compared with my “full size” batches. I’d failed to properly account for that. (Live and learn!) Second, I’d formulated the batch such that I would withhold 6 qt. of water for a mash-out but made an in-the-moment decision to just do it all together. Which might have been fine if I’d remembered to recalculate the strike temperature such that I would start in the right place. But I didn’t, and probably because I didn’t think that would be that big of a deal. (And now I’m maybe getting ahead of myself?)

Which is not to say that the experiment was a failure. There were some missed numbers, sure — and some attendant mistakes on my part. But there were also some great lessons learned! For one thing, I got some good insight into what was involved (end-to-end) for brewing these small batches on my stovetop. And I saw that it was possible! Second, I allayed some of my concerns around the immersion chiller when I observed that an ice bath operating on approx. 3 gallons was able to get it to acceptable temperatures only slightly slower than my immersion chiller outside. I learned my kitchen ergonomics leave a lot to be desired, but that these are things I can work around.

I learned I would do a stovetop small-batch again, and it would work better next time.

All that brew day retro stuff aside, I got the wort into a PET carboy, got that into the basement, and pitched my yeast. And the next morning (approx. +11 hours post-pitch) there were some bubbles in the airlock, and some krausen on the surface, and… the stick-on thermometer reading in the mid-60s ÂºF.

And/but/so: I was keeping this one low-tech and low-effort. I was going to be hands-off and walk away for a while. Wherein I couldn’t help but notice at approx. +48 hours that the krausen had mostly fallen, and the bubbles in the airlock had mostly stopped, and the stick-on thermometer was reading on the low end of the 1084 yeast’s published range but… #RDWHAHB right?

Fast-forward to approx. +168 hours (one week) since pitching and… there’s like nothing happening. Nothing in the airlock. No visible krausen. Stick-on thermometer reading in the low-60s ÂºF which just so happens to be the basement’s ambient temperature. Take a small sample for gravity: 8.2ÂºBx which BeerSmith tells me is 1.021 after factoring in the O.G. etc.

That seems too high to me. The estimated F.G. was 1.011 so it seemed we had at least another several points to go. Strategizing, I fed it 0.5 tsp./gal. of yeast energizer, gently agitated the wort, and brought it upstairs to rest it next to a heater where my hope was that the yeast would be roused and bring it down another … 5 points?

I check again three days later and… the exact same refractometer reading. (Bummer!) As-is? A 3.8% ABV beer with approx. 57% apparent attenuation. ABV-wise? Close enough I suppose. Attenuation seemed… super low, especially given that the F.G. was a good 10 points higher than the by-the-numbers style guideline information. I thought about just packaging it that way but… something about that didn’t sit right with me. And drawing a large enough sample to taste seemed to reinforce that — it seemed underattenuated.

Later that afternoon, I just decided to go nuclear on this would-be Irish Stout. Stuck at 1.021? Yeast energizer didn’t do anything? And neither did warming it up? (Because those things never do…?) I looked through my stash and found a 10 gram packet of glucoamylase enzyme.

“Is this a dumb idea?” I asked myself. And, after re-reading the dosing recommendation on the packet, I concluded that the most likely outcome was that it would do nothing.

So I dissolved it 10:1 into 129ÂºF water, then added it to the beer with crossed fingers.

Somewhat shockingly, the airlock was notably active just a few hours later. I could only conclude that the enzyme worked — that it broken down some of the longer chain starches leftover from the maybe-too-warm mash and now the yeast were going to town again.

Checking in again approx. 10 hours after adding the enzyme, I took another refractometer reading. Looking like 7.6ÂºBx which BeerSmith converted to 1.017 — OK: we’re moving the needle here.

Except that it wasn’t linear and 11 hours later it was reading 5.6ÂºBx which BeerSmith converted to 1.005 — and OMG WTF!? It’s a good thing that I had some potassium sorbate on hand to stop things before they got ever more out of hand.

Wow! What a wild ride that was, eh?

So having successfully arrested any further fermentation, I proceeded to pressure test my brand new 3 gal. keg, then draw off a hydrometer sample, and then siphon the finished beer into that new keg.

My very small good fortune was that the (mischievous) refractometer underreported the F.G. by only one point, and my actual was 1.006 making the final ABV 5.8% and the apparent attenuation 87.6%. A dry stout? Oh for sure… but would it have body? Would it drink like an Irish Stout should? We would have to see.

I’m not totally sure what to make of this beer. It’s recognizably a stout, and yet… lacking in some of the roasted grain character that makes a stout a stout. Also that whole side quest with the glucoamylase and maybe I killed the body?

MOUTHFEEL. Moderately light body — seems a too light for style. Moderate, gentle carbonation. Moderately low creaminess. Detectable but not significant astringency. Threshold-level alcohol warming — not unpleasant, but shouldnâ€™t have any.

OVERALL IMPRESSION. Seems like minor technical faults resulted in significant stylistic faults? Not unpleasant to drink, but doesnâ€™t fit as an Irish Stout. Biggest issue is the lack of a distinct roasted grain impression, and esters that seemed to distract from the rest of the elements. Body also seems a bit too light. Ester impression suggests that it might work better as a 16C. Tropical Stout? It’s otherwise too dark and too strong to position as a Category 13 beer; and not nearly hoppy enough for Categories 19 or 20.

I’d like to take another swing at this beer sometime; it seems a real shame to have got it into the neighborhood and then still crashed and burned. I would like to think that the grist works as-is, and that I more controlled and cooler mash would give the resulting wort the fermentability that it needs. This would allow the beer to get into the right F.G. range without needing the … uh … “assist” from the glucoamylase toward the end there. Similarly, I think a slightly larger pitch would have helped, as would a better controlled fermentation. I think those three things together are what marred this beer. In other words, perhaps the less-fermentable wort would still have attenuated well-enough if there had been a big enough pitch at the beginning, and a warm-enough fermentation. Or else maybe I could have gotten away with the less-controlled fermentation if I’d pitched more yeast into a more fermentable wort, etc.

That is to say: I don’t think that this was a fault of the recipe, but rather some errors in process.

And that said: I’m still going to drink it all.

The all-grain (3 gal. small-batch BIAB) recipe for Murphy the Lucky Dog is as follows:

Murphy the Lucky Dog, an Irish Stout by Tilde Gravitywerks