Brewing a big ol’ barleywine is a homebrewing right of passage, right? Something you simply must attempt at some point? And so here was my first stab at it — Extinction Event:

The main motivation for Extinction Event was the temptation inherent in the challenge of brewing a high-gravity beer. Having tried and failed to brew an Imperial Stout, an American Barleywine seemed like the next obvious choice for such a Big Beer™. I don’t drink a lot of these, but I do drink a couple each year — usually as a holiday treat or to commemorate an occasion.

So I started working out a recipe, and eventually settled on one. And then a friend came along (half-jokingly?) with the perfect name. Which of course meant that I needed to throw in a little Comet hops just to drive the pun home.

I started setting up the night before. I collected my water, filtering it through a carbon filter and collecting it in HDPE buckets. Each one got half a crushed Campden tablet and their brewing salts. (Let’s get as much chlorine out of there as we can, am I right?) After that I staged the gear and got myself off to bed for what would be my last garage brew of the year. 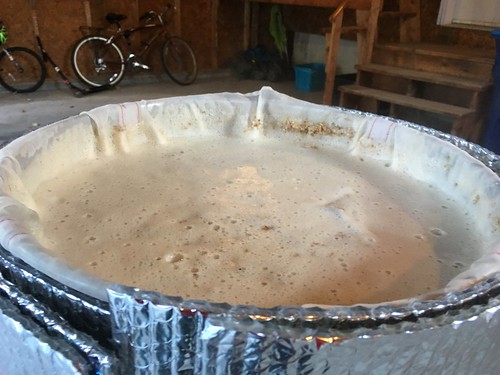 The next morning, I milled my grain and got the flame going for the strike water. I mashed in at 152°F and… well… held my breath at just how full that kettle was. Seventy-five minutes later, I pulled the bag and did my post-mashing science: 6.8 gallons of wort at 1.072.

I got the flame going again for the boil and followed along with my formula’s schedule. An ounce and a half of Galena at 60 minutes. One pound of brown sugar at 30 minutes. Two and a half teaspoons of yeast nutrient and half a teaspoon of Irish moss at 15 minutes — and an ounce each of Amarillo and Comet. As the timer went off, I started running cold water through my chiller; when the wort hit 180°F, I added two ounces each of Comet and Ekuanot, and another ounce of Amarillo.

Time for some post-boil science: boiled down to about 5.75 gallons, and an original gravity of 1.091.1 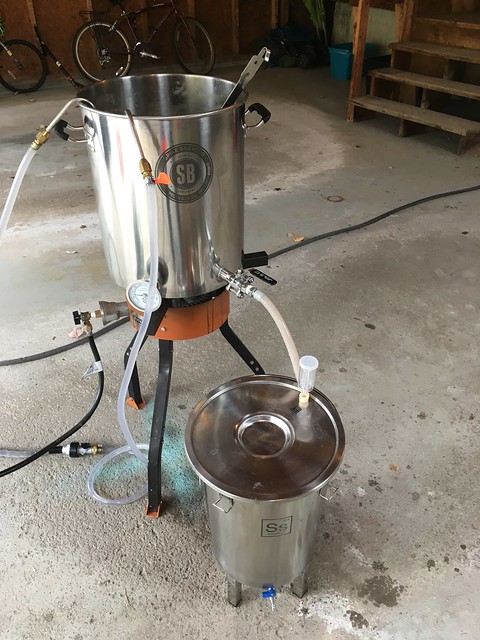 With the wort chilled to 65°F, I decanted (most of) the supernatant off the yeast and pitched about 400 ml of slurry and the remaining supernatant. I set the temperature controller to 66±1°F. I had steady bubbles in the blow-off bucket after about 17 hours.

The temperatures and bubble activity held steady for several days. I took the first sample for gravity at +54 hours. I sighted 15.5°Bx in the refractometer; BeerSmith converted that to 1.045 but it’s typically a few points off, so it was probably more like 1.049.

At this point, it was smelling hoppy a.f. — practically IPA hoppy. I felt my brow furrow here and thought to myself well geez this could pass for almost any style in Category 22.

I started bumping up the temperature after another day, bringing it up to 68±1°F over three more days.

I took another gravity reading (hydrometer this time), saw that it had come down to 1.017. I pulled it from the fermentation chamber and fined it with gelatin.2 I let the finings do their thing for a few days (I left town for a little trip, so it was easy to be patient) and racked the beer to a keg afterward.

I did a “mostly closed” transfer from the Brew Bucket into a keg, getting about 4.75 gallons of finished beer which — having pulled just one more sample for gravity — had finished at 1.015 for 10.2% ABV.

I chilled it down to 40°F and then put it on CO₂ at 12 PSI for about a week. The first pour was pretty hazy/cloudy,3 but the next two were looking a lot better.

A pro-brewer friend of mine remarked that his rubric for judging a barleywine is that it should drink about 2% lower than its actual ABV. And this one seemed to hit those marks for him.

FLAVOR. Malt character presents as moderate toasted bread with supportive notes of caramel and a black cherry jam. Light amounts of toffee mid-palate. Finishes semi-sweet with significant warming. Less hop character in the flavor than on the nose; presents more like marmalade and the fruit puree on a pineapple upside down cake. Retronasal impression is of grapefruit pith. Medium but firm bitterness. Balanced finish leans toward malt impressions. Long semi-sweet aftertaste.

OVERALL IMPRESSION. A hoppy, warming, and decidedly high-alcohol beer. Relatively smooth despite the high alcohol, and arguably deceptive in strength. Considering the hop presence on the nose, I would expect more of it on the palate as well. Contrariwise, the malt expression on the palate does not translate to the aroma. In that sense, it’s slightly out-of-balance, though not unpleasant. And while not a thin beer, it does seem a little light for the style and could have its body boosted somewhat. We’ll see how it does in competition, but I judged it in the Very Good range. That said, I wonder if it would score better as an American Strong Ale?

Were I to make this one again, I would consider dialing back the late hop schedule slightly so that it doesn’t overwhelm the malts in the aroma. I would also consider boosting the bitterness somewhat — I don’t think the end result was aggressive enough for the style. Again, while the result wasn’t a light-bodied beer, it would benefit from some more weight; perhaps a maltodextrin addition during the boil?

Overall, I’m pleased with how this one turned out and/but/also filing this one under the heading of “Not Bad For a First Attempt”. These early pours have been tasty though, and surprisingly not harsh in terms of alcohol or “hop burn”. Now to get a case worth into bottles for cellaring…

The all-grain (BIAB) recipe for Extinction Event is as follows: