As we raced to the end of 2018, I wanted to fit in at least one more new-to-me style. I don’t know the Bière de Garde style well1 but the description was intriguing. And while it isn’t much of a clever name, I haphazardly dubbed it Le Rousse2– an ambrée bière de garde.

Given that I don’t know the style too well, I’ll readily admit that I cribbed heavily from some recipes I found. In particular, Gordon Strong’s recipe in Modern Homebrew Recipes and Josh Weikert’s on Craft Beer & Brewing. I wanted to brew one on the amber side, and dialed in my formulation accordingly.

As is my custom, brew day really started the night before — collecting my water and dosing it with minerals to achieve the profile I wanted. Bright and early the next morning though, I was milling and heating my strike water and mashing in and calibrating the pH meter etc. 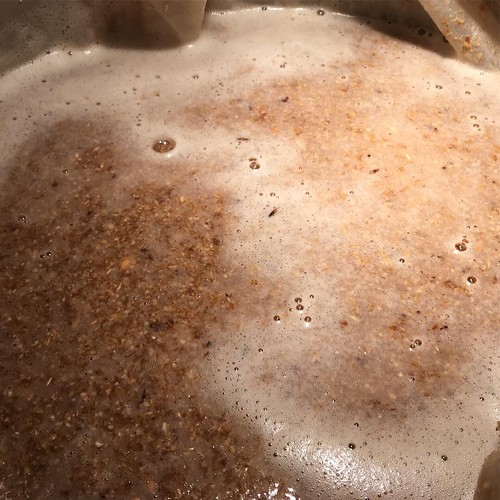 I held the mash in the neighborhood of 152ºF for an hour, then decided to extend it by 15 minutes. Meanwhile, I was heating the mash out water, performing that infusion when the saccharification rest was otherwise completed. After pulling the bag and squeezing, I had approximately 7 gallons in the kettle at 1.057.3 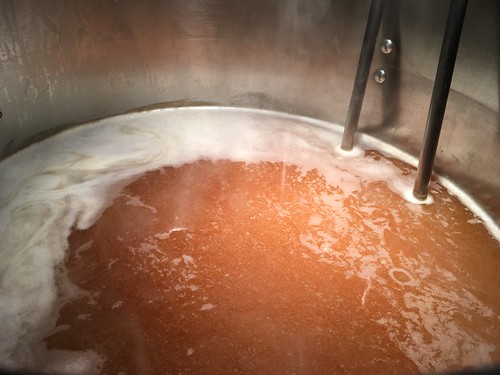 Proceed to boiling — 60 minutes on the stovetop, straddling two burners at full-blast — and add in the hops and candi syrup according to the schedule.

Post-boiling science gave me approximately 6.25 gallons after chilling at an original gravity of 1.064.4 I ran off 5.5 gallons into the fermentor and pitched 200 ml of 1007 slurry (after decanting the supernatant) once the temperature was below 62ºF. 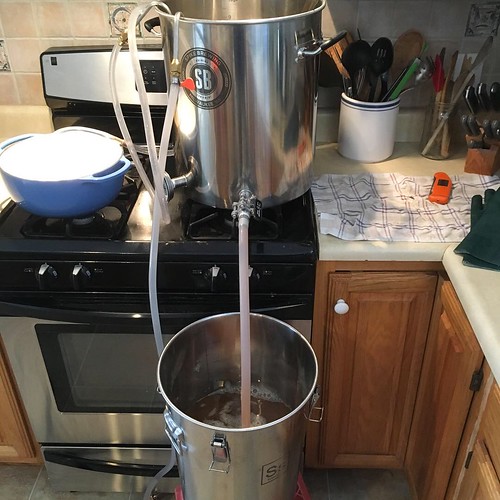 With the yeast pitched, I set the controller to 62±1ºF — only this fermentation wouldn’t stay there. After a little over two days at that temperature, I ramped it up to 63±1ºF. Then +1ºF after another 24 hours. And I kept doing this until I reached 69±1ºF. Once I hit that upper limit, I held it there for three days, whereupon I began to reduce the temperature 1ºF every 12 hours until I got back down to 62±1ºF. 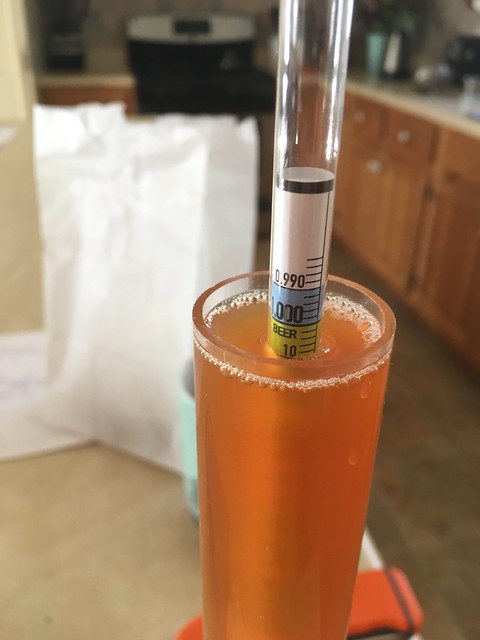 Refractometer and hydrometer readings confirmed a final gravity of 1.010. I cold-crashed the beer, adding gelatin to fine after 24 hours at 34ºF. The beer sat with the gelatin for two days before I packaged it. Three 22 oz. bottles and seven 12 oz. bottles were primed with carbonation tablets (two each and one each, respectively) and set aside to bottle condition. The rest went into a keg which was put on 15 PSI for a couple of days.

I can’t rightly say if it’s a particularly good bière de garde, but I sure am enjoying it. 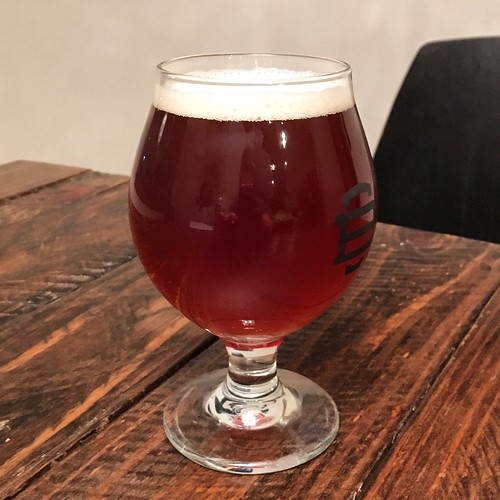 APPEARANCE. Good clarity. Khaki head of moderately dense foam; great retention. Color is deep amber to copper (probably between 13-17 SRM?) with mahogany and ruby highlights. Color impressions are highly dependent on how the light strikes it. Flirting with being a brune example of the style. [3/3]

OVERALL IMPRESSION. Very good (possibly excellent?5) example of style. [34/50] Overall impression is of a malty, fairly alcoholic beer with good drinkability. Though it’s already quite smooth,6 suspect some aging could smooth it out more. (Consider lagering a bit longer or cooler?7) The malt profile lends to drinkability but also seems to lack some complexity? I believe a little some stronger “toast” character would better balance the “malty-sweet” and “dark fruit” that are otherwise prominent. [6/10]

I’ll be curious to see what this beer matures into, but I’m also enjoying it enough that I’ll probably crush my way through the keg. There are no obvious-to-me places to improve it. I’m curious to see what judges have to say about it. That said, I think my rash decision to swap in some Red X in place of the Munich probably hurt that toasty impression a bit.