Yeast harvesting and re-pitching had kind of fallen by the wayside for me over the past year or so. In 2017 through the early part of 2018, I’d tried to do quite a bit of it. The petite fiasco with Prosody (Mosaic) turned me off on that aspect of homebrewing for a while.

That being said, if you’ve got a big healthy yeast cake from a just-racked lager, then it seems a shame not to re-pitch it. So that’s just what I did here â€” drew up a recipe for a Munich Dunkel and called it Urban Owl:

There were a couple of things motivating this particular brew. As I already stated, I knew I was going to have a big healthy colony of lager yeast. I looked up a couple of styles that could work with the 2278 Czech Pils and decided to go with a Munich Dunkel. (Mostly because it would be darker than the Czech Amber Lager that preceded it â€” no color contamination.)

I’d also been looking to make some lagers, and a having a Munich Dunkel on draft seemed like the perfect thing to round out this end-of-winter phase.

The recipe is one I cobbled together with inspiration from Weikert’s and the one in Strong’s Modern Homebrew Recipes. About 85% Munich malt, about 10% melanoidin, and then the rest as Victory malt with just enough Midnight Wheat1 to get the color I wanted. I would bitter to about 20 IBUs; I had a bunch of Mt. Hood on hand (a reasonable substitute for Hallertau), so I used that for the early bittering charge and then a late addition of Perle. As for the yeast… Ready and waiting: 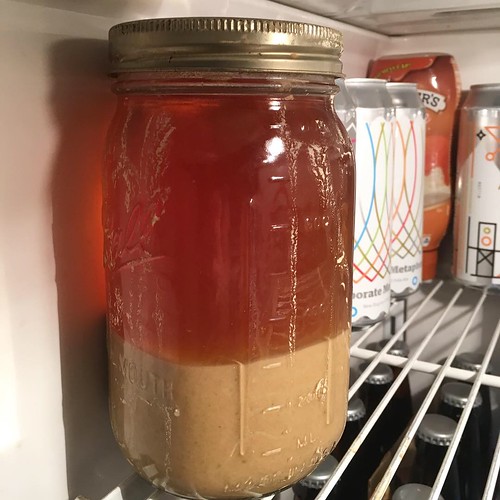 Brew day got going bright and early. Did a final review of my formula, staged my gear, collected my water, weighed out the brewing salts, milled the grains… The original plan was to do this as a single infusion, with a mash-out infusion after conversion was completed.

However, after mashing in, I noted that the average temperature was 148ÂºF â€” significantly lower than the 152ÂºF that I expected. Thinking on my feet, I decided to turn this single infusion into a step mash. Given that I already had my mash-out infusion in the kettle, I turned the flame on and did the calculations to see what it would take to bring the main mash up to 156ÂºF for a second rest. 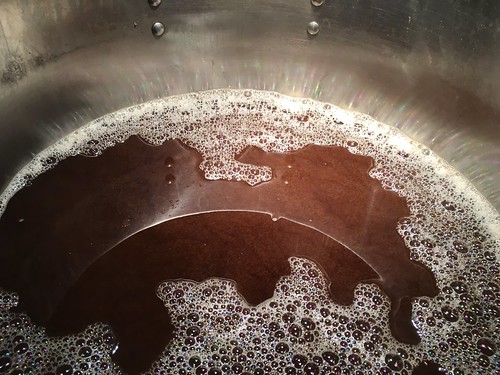 I got the flame going for the boil, added 1 oz. of Mt. Hood at 60 minutes, then the 1 oz. of Perle at 5 minutes. Chilled to about 70ÂºF, drew off a sample for gravity, then filled my Brew Bucket and got it into the fermentation chamber to finish chilling the rest of the way. Original gravity was 1.056.

After a couple hours in the fermentation chamber, the thermometer was reading 52.6ÂºF. Satisfied with that, I pitched approximately 300 ml of 2278 slurry that I’d harvested just two days before. I decanted off the spent beer and dumped it in.

What happened next I’ll file under dumb mistakes. I checked on the fermentation at my typical intervals (about 12 hours apart) and noted to myself that even at +38 hours, I wasn’t seeing any bubbles in the blow-off bucket. I tried to reassure myself that oh hey you know lagers are just slower to start and maybe a little less vigorous but… I’d been seeing activity with Half Dark by +39 hours. I tried not to worry, but then I did when I came back at +50 and there was still nothing. So I re-checked the seals and sure enough: one of the latches on the Brew Bucket wasn’t fully engaged, meaning that the lid wasn’t all the way on. Fixed that up and saw plenty of activity 5 minutes later.

I let this fermentation ride out another couple of days and then started ramping up the temperature for the diacetyl rest. After that? Bring it back down, fine with gelatin. Final gravity 1.013 â€” time to keg it.

Malty and delicious and dark. Decidedly pleased with overall result.

AROMA. Medium leaning strong malt character: moderate caramel and cocoa and toasted bread. None of these elements are especially strong on their own, but they have a pleasing synergistic effect. Hop contributions are a low intensity floral-over-spicy element. Clean fermentation profile â€” no significant diacetyl2; no DMS. No significant esters. A touch of alcohol comes through on the nose, detectable just at threshold.

APPEARANCE. Dark brown color with garnet highlights; there’s a sense of depth in the glass. Khaki head with excellent retention and creamy texture. Excellent clarity, though not quite brilliant.

OVERALL IMPRESSION. I don’t know the style well but my take is that it’s a very good example. Perhaps slightly over-bitter, and while malt has some good complexity, it’s lacking in some of the expected richness. Body also could use a little more oomph; I would argue that it’s in the right range, but lacks some of the characteristic softness and fullness. (It might also be slightly over-carbonated?) That said â€” flavors are good, and this beer is enjoyable to drink. There’s a solid foundation here and some tweaks could bring it into the excellent range.

I’d like to hear what some other judges say, but I think if I were to change anything for next time:

We’ll see how it does in competition.

The all-grain (BIAB) recipe for Urban Owl is as follows:

Pingback: What Is a Dunkel Beer? - Best Beer Near Me