As we raced to the finish line for 2018, I figured that I should try to fit in one last brew day to end with a nice round number of 30 batches for the year. That 30th batch took the form of Prosody (Amarillo):

The last beer in the Prosody series was Huell Melon, back in August, and I had a few ounces of Amarillo left over from Extinction Event and Lupulin-Industrial Complex, so it seemed like a perfect candidate. I’d also picked up a sack of Briess 2-row base malt and though I’d said I was going to go back to the Pale Ale malt… maybe I was better off working with what I had if I could otherwise get the 1332 yeast I wanted?

This being the fifth beer in the single-hop series, I felt like I was starting to get things pretty dialed in. The night before, I staged my gear, weighed out my grains, and measured my mineral additions for the water.

That morning, I collected my carbon-filtered water and dosed it. Then I milled my grains. I didn’t actually start brewing until the afternoon though. 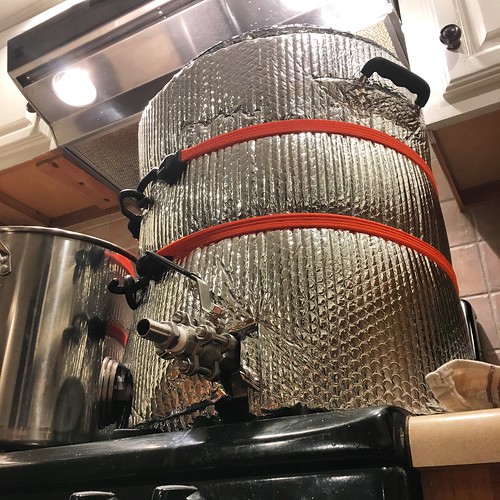 I got my heat going for the strike water in the mid-afternoon and mashed in around 4pm. My temperatures held fairly well over the 75 minutes, starting at 152.4ÂºF and finishing at 149.8ÂºF. I was a bit off on pH and had a reading of 5.15 but decided not to stress about. Post-mash measurements looked like 6.7 gallons of wort at 1.050. 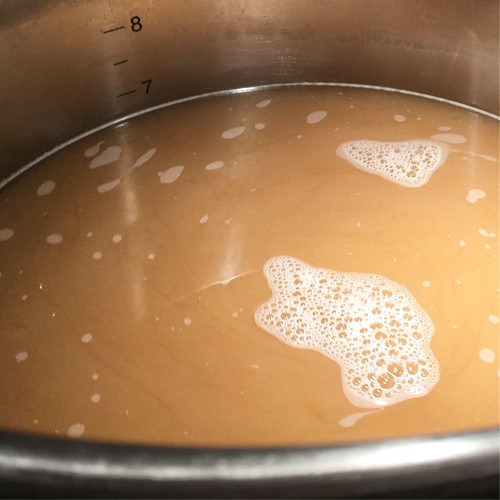 Boiling and chilling were fairly uneventful. I put 5.5 gallons of wort into the fermentor at 1.056 with a pH of 5.23. I decanted the starter and pitched with 65.1ÂºF reading on the Thermapen.

With the yeast pitched, I set the controller on the fermentation chamber to 67Â±2ÂºF. Historically, this has seemed to work well for the 1332 yeast to develop the character that I want out of this beer. I had some vigorous activity in the blow-off bucket by 12 hour post-pitch, which probably peaked around 48 hours.

Activity in the blow-off bucket tapered off signficantly after about 4 or 5 days, so I bumped up the controller to 69Â±2ÂºF to try and encourage complete attenuation and metabolizing of any byproducts. I held it there for about 3 more days until I observed final gravity.

Activity in the blow-off bucket appeared to have stopped as well, so I added the dry hops at that time.

After five days on the dry hops, I cold crashed the beer for 12 hours1 before adding gelatin finings. I let the gelatin work for about 24 hours before racking the beer to a keg.

I used a lid with a carbonation stone and applied 26 PSI for about 6 hours before moving the beer into the kegerator for serving. Pretty much exactly two weeks from the brew day to the first pour.

It’s drinkable, but it’s not my best work. I’m not sure that I did the Amarillo the justice it deserves. 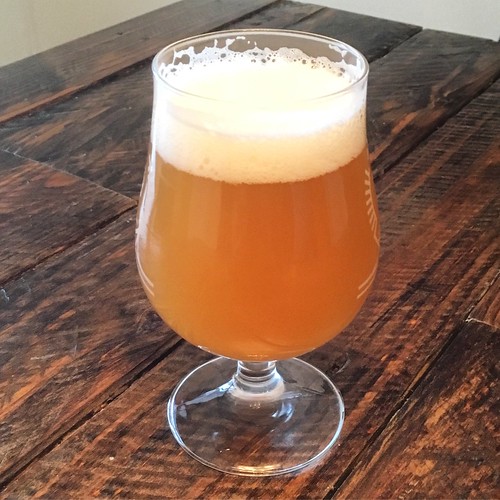 FLAVOR. Medium-intensity citrus (grapefruit and clementine); moderate pine; light notes of peach and apricot. Medium-low malt character mostly like crust of a light-colored bread. Some low toast. Medium-low fruity ester (again) as raspberry. Assertive bitterness, but not harsh. Balances to bitter, which dominates the aftertaste. Does not linger particularly long. Seems slightly muted though. Also a faint impression in the back of the throat that seems off — possibly acetaldehyde? (It’s a little bit cut pumpkin, a little bit latex paint.)

MOUTHFEEL. Medium body, but seems lighter with its dry finish. Medium carbonation. No significant creaminess. Slight astringency? — but might be an impression from the bitterness and/or the dry-hopping. No significant alcohol warming.

OVERALL IMPRESSION. Fair to good example of style. Flirts with the IPA style (and might score better as one?) but seems to straddle the line between the two — like an APA should have somewhat more malt expression. Hop character seems on-balance for style, and maybe on the low-end of an IPA. Given the dry hop rate, I wonder why the intensity is so low; could be suffering from some oxidation? And if there is acetaldehyde, could that be distracting from the pleasing flavors? While “slightly hazy” is acceptable for style, the haze here borders on “opaque as an NEIPA” — hence the “APA vs. IPA” identity crisis. And while I’ve nit-picked this beer to death here… it’s still drinkable enough. Not competition-worthy though.

This does bring to mind a few things that I’ll need to watch.

First, my love affair with 1332 may be coming to an end. I finally learned to recognize acetaldehyde over the past couple weeks, and though I wasn’t tasting it on the first pour here… I thought I picked it up on some of the subsequent pours. The sort of “raw pumpkin” impression that people talk about,3 and usually retronasally. It’s not strong — which is reassuring — but I also believe that my threshold is high, so it’s probably stronger than I think. I’d really like to think that it’s just a priming effect though — that it’s something I want to find in a beer, now that I finally know what to look for. That being said, acetaldehyde was a fault cited in competition on the Mosaic batch. Given the differences in their grists, the yeast strain is the common denominator here. This needs some more research, but it seems likely.

Second, I suspect I need to double-down on minimizing my Oâ‚‚ pick-up. I’ve been making incremental improvements to my packaging process to try and minimize oxygen, but they’re definitely not fully closed transfers. They’re not sloppy transfers, but it would be nice to lower the Oâ‚‚ ingress even further. That would protect the hoppy character, for starters. And it might also help reduce the risk that the alcohols will remetabolize back into acetaldehyde. (Which I suspect might be part of what happened here.)

My third observation (and I know I said this last time) is that I should get some Briess Pale Ale malt back into the mix. Given that I have so much of the 2-row, I figured that I would try this formulation again without the Pale Ale — but I boosted the Munch Dark from one pound to two. I suppose I could go to three? But it’s the Pale Ale malt that’s missing.

Lastly, I need to eat my hubris and get back to the fundamental virtue of patience. If there is acetaldehyde in there, then I have to ask myself if leaving the beer on the yeast a little longer would have made a difference? (I don’t think it would have in this case, but it’s worth asking.) And then there was the cold-crashing and the fining. I cut the cold-crash time in half. Ditto the gelatin fining.

I guess sometimes we’ve got to be humbled.

The all-grain (BIAB) recipe for Prosody (Amarillo) is as follows:

Starting with the Champlain Water District profile as a base, carbon filter the water and add:

One Response to Homebrew #80: Prosody (Amarillo)