Generally speaking, Brew House Efficiency (BHE) is number, expressed as a percentage, that calculates how efficient your wort production is — i.e., how much of the potential fermentables actually make it out of the grain and into your fermentor. The calculation is comprehensive, and accounts for (among other factors) how much of the grain’s starches were actually converted to sugars, and how much of the produced volume was lost to losses like absorption and transfer losses.1

When I was new to all-grain brewing, BHE was not a number that I kept track of. It wasn’t that I didn’t know about it — it was that with everything else to learn, I just wanted to see if I could pull it off at all and then maybe I could start to quantify and use those numbers for process improvement. That said, I probably started to care about BHE numbers after about a year of partial mash brewing2 and then another year (coincidentally, when I moved from partial mash to all-grain BIAB) before I started tracking it consistently.3

And that being said, it took me another two years to finally get around to actually looking at all the compiled BHE data. (Guess I just needed enough of it?) The main question I found myself asking: Why is it that my BHE numbers are usually lower (and further off) for my higher gravity beers? 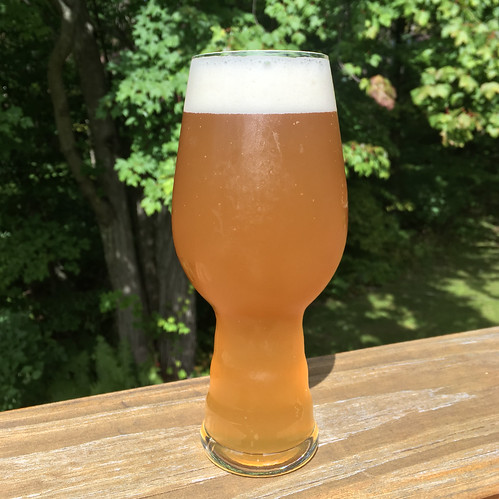 I’d heard this before. I’d read a few articles and blog posts that mention using lower BHE for planning high gravity beers. Hell, if you look at the recipes in Modern Homebrew Recipes (Strong, 2015), you can see that relationship between the O.G. and the BHE — e.g., 75% for the 1.048 West Coast Blonde vs. 60% for Sara Bonnyman’s Wee Heavy at 1.087.4

But other than cautioning brewers that high gravity beers will have lower efficiencies, none of these sources really indicate why to expect lower BHE, nor what constitutes “high gravity” in the first place.

This is what I set out to learn — and even if I couldn’t get to the root of the former, maybe I could at least make some inferences about the latter.

Naturally, the first step is to collect and organize the data. As mentioned before, I’ve been collecting these data for about as long as I’ve been brewing. I already had target and actual O.G. for every beer going back to my first, and pretty good coverage on the measured BHE for beers from the past 2 or so years. Getting the BHE numbers for the missing beers was easy — just pull them up in BeerSmith and enter the missing data into the spreadsheet.

With the data loaded into RStudio, I set about trying to visualize these relationships.

I plotted the beers according to three dimensions: measured BHE along the x-axis, and then their target and actual O.G. on the y-axis. To help myself understand where each beer fell, I also drew a line at the 72% that I’d used as the assumed BHE for most of those beers.

At first glance, the plot makes it look like I’m under my target O.G. more often than I’m at it or over. Looking more closely at the numbers, this is true, but not dramatically: 27 times under vs. 25 times at or over. Visually, there appear to be some other trends: (1) most of the “over” beers have target O.G. ≤1.060, (2) target O.G. >1.070 seems to coincide with a significantly5 larger negative delta, and (3) BHE numbers are mostly clustered in the 60-70% range.

Now, back to my original question: Is there a breakpoint where I should start using a different BHE in my recipe calculations? Acknowledging that this is probably more of a curve than a specific point — I (semi-arbitrarily) picked 1.065 as the boundary condition and re-generated the graph.

OK now I feel like we’re getting somewhere. There is more variance within those two groups (i.e., ≥1.065 vs. <1.065) than I’d originally anticipated, which means that it looks like there is less of a difference overall. But using our favorite measure of central tendency (median!) across all the beers within each group, we get some encouraging results:

Making some inferences from that boxplot, it seems that:

If we apply a generalized linear model to these data (BHE as a function of target O.G.), these conclusions mostly hold up.

This model suggests lower BHE generally, despite the relatively high number of beers with BHE >75% with target O.G. <1.065. That being said, the model is close enough to my intuitions that I’ll follow my conclusions into 2020 and see how well they predict BHE on beers in those two groups.

Though I feel reasonably confident about the 1.065 breakpoint on my system, I also feel like there are other factors at work here. Having done this analysis, I find myself asking a few more questions: