Going way back to before I had any idea of what I was doing1, I got it into my head to make a red-as-possible Trappist-style ale. Something in the neighborhood of a Dubbel in terms of color (but redder) but closer to a Belgian Dark Strong in terms of strength and flirting with both with respect to flavor. I’d throw in a little bit of rye because that’s what I do, and that brings us to Avout:

The first time the concept for this beer shows up in my notes is 2015 — right around the same time read Anathem. I guess it makes sense that this beer would get that name: the Trappist-inspiration coming up against my own secular (“mathic”?) tendencies. But it would be another three years before I felt confident enough in my brewing skills to tackle this one.2

Fast-forward to the summer of 2018 and I felt ready to pull the trigger on it. Given the planned high O.G., I knew that I’d want to pitch a lot of healthy yeast. This is where Glorified came in — as in “I’ll brew a smaller beer that’s just a glorified starter for this one.”

I staged a bunch of my equipment the night before, then got started on my brew day nice and early. By seven o’clock, I’d milled my grain and had the flame going to heat the strike water. 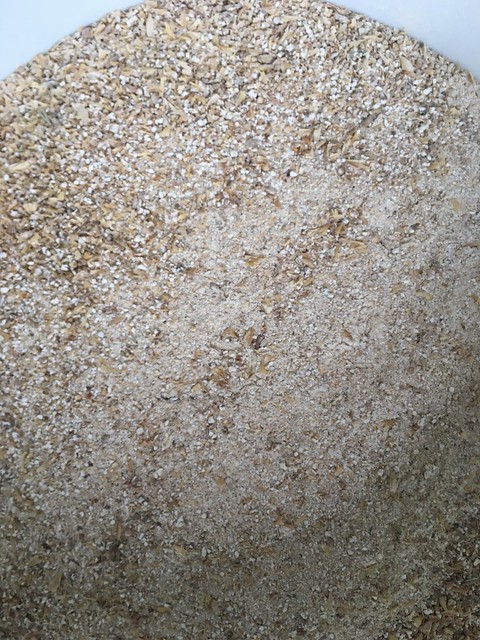 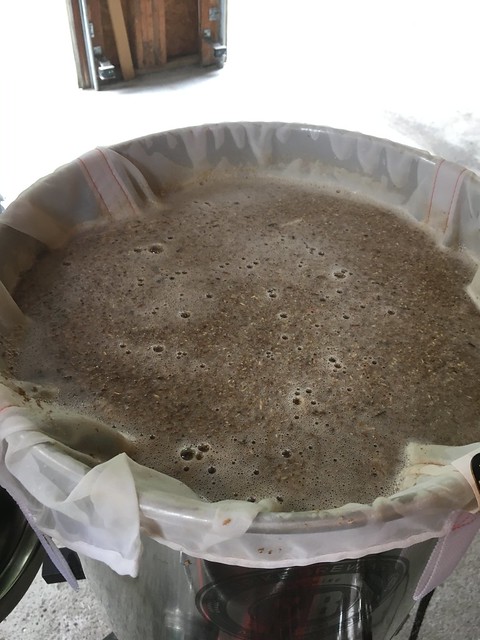 After the bag squeeze, I had about 7.75 gallons in the kettle at about 1.054. I got the flame going again for the boil, skimmed off the hot break as it came up, and generally tried to follow the “clean as you go” advice.

At the end of the boil though, I had 6.25 gallons in the kettle still — easily a half gallon more than I “should” have. I suppose that in trying to avoid too aggressive of a boil-off rate, that I managed to dial back the heat too far in the other direction. Regardless, I still had a respectable 1.075 original gravity.

I took down a few notes so that I could do a little retrospective on the brew day later, then pitched approximately 400 ml of 3787 slurry that I’d harvested from Glorified just two days before. 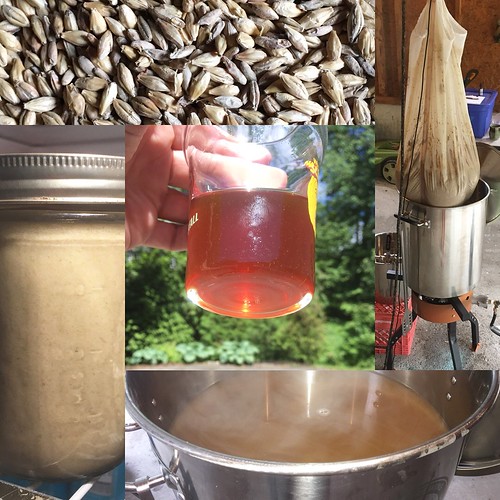 I pitched approximately 350 ml of slurry that morning, the wort reading at 64.5°F. I locked in the controller at 65±1°F and went about my merry way, confident that this would be chugging away in no time. 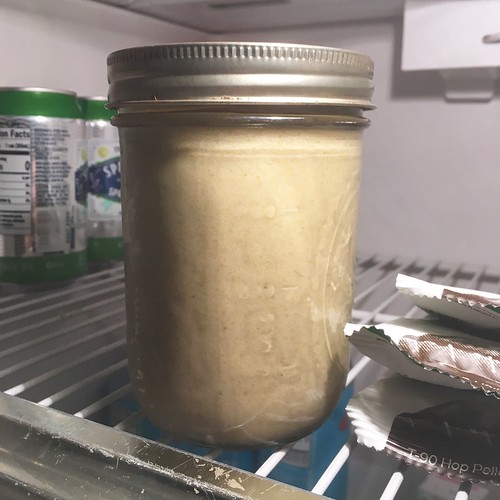 And sure enough by +20 hours post-pitch, there was vigorous and frequent bubble activity in the blow-off bucket. The krausen was already forming a nice healthy cap, and I was already over-thinking the style space that the finished beer would occupy. 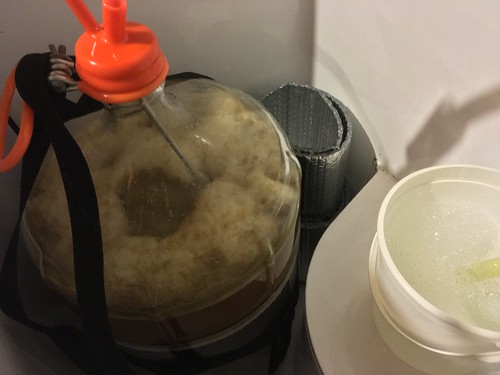 In my desire to be true to the spirit of the Trappist-style, I wanted to naturally carbonate the beer. That said, I did not want to “referment in the bottle” with a little priming sugar because — let’s face it — bottling is a pain the ass. Putting on my thinking cap, the obvious compromise was to rack it over into a keg and onto the priming sugar. (In this case, 3.2 oz. of clover honey.) I tested the keg for leaks, purged the headspace with CO₂ and… just tried to forget about it for a month.

Reflecting on the times I’d primed with honey3, I knew that I’d need to be patient. A month at least for the carbonation to get up to what it ought to be. So I stuck that keg in a corner of the basement and tried to remember to very gently agitate it once in a while — i.e., turn it upside down for a minute or so and then right it.

I tried not to think about it too much. I really did. But after all this time, I was also so anxious for it to be ready. Every time I went down there for something… “Are you ready yet?” I would whisper.

And I think the patience paid off.

Oh my. So smooth, and meandering in the style space between a Dubbel and a Belgian Dark Strong.

AROMA. Impression of dark (almost burnt) caramel; lightly toasted bread. Lightly grainy malt aspect in the background. Spicy notes like cardamom and clove and black pepper. Hints at orange blossoms. Moderate notes of prunes and raisins. Background alcohol note. Most of these aromas are in the light to moderate range; nothing overwhelming or strong.

FLAVOR. Initial hot take was basically: “dark caramel and black currant jam spread on a toasted biscuit”. Front of tongue impression is mostly dark caramel and dark fruits (black currant, prunes, raisins, cherries) — all in the moderate range. Mid-palate impression is mild toasted biscuit and moderate dark caramel. A slightly spicy character toward the finish, along with some alcohol. Floral hop impression retronasally. Hints of honey throughout. Moderate bitterness, but balances toward malt-sweet. “Burnt caramel” impression lingers into the aftertaste.

OVERALL IMPRESSION. Would probably score “very good” as either a Belgian Dark Strong or Dubbel4. Feedback as a Dubbel would probably be that it’s a little too strong ABV-wise. Suspect that feedback on this as a Dark Strong would be that it’s a little light in color, and that it’s lacking a little in the complexity department. Possibly slightly under-carbonated in either case. For me, as-is, I find this to be a semi-sweet beer with dry finish and warming alcohol that is noticeably strong. There are no obvious technical faults, though it doesn’t seem to fit neatly into either of the likely categories.

I’ll probably seek out some opinions about where it might fit for competition.

Were I to re-brew it, what would I do differently?

For starters, I’d try to hit my gravity. I’d intended it to be a 1.085 O.G. and while the actual 1.075 is still respectable, it isn’t what I had in mind. In fairness to myself, this was the brew day where I realized that I needed to start better tracking certain variables (e.g., power level setting on the burner) to dial-in my brew days in the garage. That said, I can do better there.

Malt complexity is another area where I’d look to improve. Another place where I’ll claim “in fairness to myself” — I’ve tried to follow the whole “less is more” strategy with grists the past year or so. I’ve found that it’s just too easy to go overboard with 2% of this and 5% of that etc. until your grain bill is twenty different things in single-digit ounce quantities. But in my effort to avoid a hot mess, I think I over-indexed on the simplicity angle and missed some opportunities here to have some more interesting character.

Different yeast? Wyeast 3787 Trappist High Gravity seems to be… significantly cleaner than I’d been led to believe. It still has much of the Trappist character just not as pronounced as I had expected. (That said, maybe Glorified got the lion’s share of those esters etc.? Not that it was especially estery or anything…)

So… some tweaks, perhaps — but overall I’m very satisfied with how it turned out. This will be a tough one to figure out how to enter into competition. But it’s smooth — if dangerous — drinking.

The all-grain (BIAB) recipe for Avout is as follows: