Yesterday was the 2018 Greg Noonan Memorial Homebrew Competition. I went pretty big this year, with 12 entries between all my beers and meads, and it paid off with seven medals — including a successful defense of my Mead Maker of the Year title. In addition to competing, I had the privilege of judging and hopefully I will earn some experience points for it after the exam in two weeks. 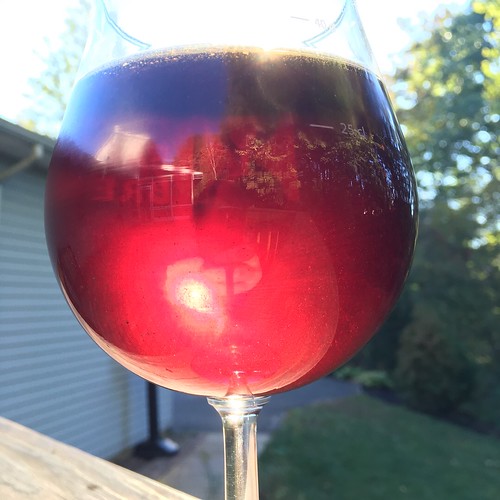 Not gonna lie — I was pretty excited that I was able to bring home the Vermont Mead Maker of the Year award for the second year in a row. I scored a 42 for the rhodomel version of Imposter Syndrome — which the judges loved and described as red wine-like, with a rich aroma, and a dry finish. It seemed fitting that the mead I made on behalf of the club for 2017’s Mead Day demonstration should go on to be the big winner.1 My only regret is that I didn’t make more of it.

I also brought home a few other medals:

“I’m sorry I made you drink that.”

One of the big disappointments for me was Prosody (Mosaic) which got 20 points. While hardly a “courtesy score”, this is probably my lowest-scoring competition beer to date. When it was super fresh, I was pretty satisfied with this beer — all those juicy tropical fruit notes from the Mosaic being super-strong and all that. But they faded faster than I expected and (worse) when they faded it was like a window into the beer’s big flaw.

And that flaw? Petite mutants.

It was the fifth or sixth pitch (and after a year, at that) from the originally cultured colony. This was just a dumb mistake on my part. I thought I could break with the conventional wisdom around how far you could stretch your yeast. I was wrong. With the hop aroma gone, you got all the acetaldehyde and diacetyl and everything else.

“I’m sorry I made you drink that.”

Themes in the Feedback

In some ways I count myself lucky that there was no single theme that cropped up in all of the feedback. That tells me that, for the most part, I’m doing the right things and that any given bit of feedback is situational to that specific beer.

Mild/light astringency was observed on a couple of beers (but not all), which is feedback I’ve heard before. (Again though: not on all of the beers.) I’m still trying to piece together the patterns here to see why some would suffer from this (but not all) — and thus what I can do about it. That research continues.

One or two of the beers had sanitation issues cited. This is always frustrating feedback to get because I’m notoriously clean and a stickler for this sort of thing. I’ll have to look at those beers and see if I can line them up on timing — was there any gear I needed to replace etc.

Oxidation came up on a couple beers ago, and is equally frustrating as when sanitation is cited. I’m not sure what else I can do in my current set up and process to cut down on oxidation. I have a feeling though that investing in something like an Anvil or Ss brew bucket could help here — but still: why wouldn’t this get cited on more beers?

Dry hopping rates. I tried to dial back on this a little bit based on some feedback from previous competitions and shared beers. Seems I over-corrected?

And with the meads… Anything I entered as petillant came back with comments that they were really more in the sparkling range. Noted.

I got to sit with Dan Hament and judge a flight of six British Stouts. I learned a lot from him over two hours. Also, hilariously, our scoresheets were identical for the calibration beer. As I recall, we only had one beer where we were wildly divergent. Otherwise we were pretty darn close. It was a great experience.

And as I looked around the room, I saw a lot of friends from my BJCP study group paired up with experienced judges, cruising through flights.