This beer didn’t start out as a master plan or a bright idea. This beer wasn’t a flash of inspiration. This beer was me staring at the sachets of leftover hops in my refrigerator. The hops I’d planned to use but at the last minute decided would add too much bitterness. The hops sealed up after I used the ¼ oz. for bittering that 3 gallon batch. Yes… Younger Sister was a beer built around the leftover and hand-me-down hops from previous batches. Which does not at all diminish her beauty: 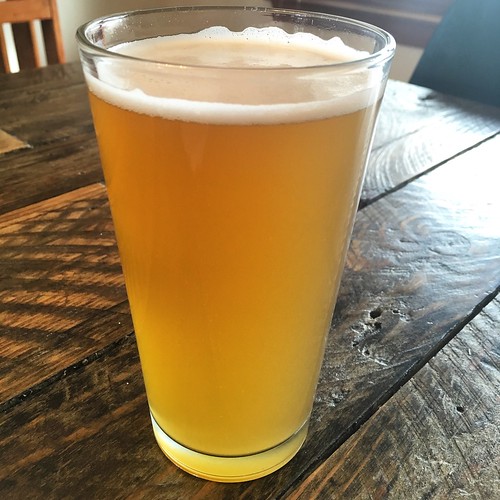 I stared at those sachets, fussing over what I already had on hand. Three-quarters of an ounce of leftover Galena, and an unopened 1 oz. sachet of U.S. Tettnang. What are you going to do with those? I wondered. And somewhere in my reading, I got the bright idea that this combination might actually make a decent blonde ale. Something light and approachable, something that I could brew and start serving with relative haste.1

After all, I wanted to get those hops used up before they went bad, right?

To the extent that I planned Younger Sister at all, I turned my attention to Zainasheff’s 2008 BYO article on the style. He writes:

Blonde ale should always be a smooth, easy to drink beer with a clean fermentation profile and just a touch of malt character. Held to the light, it is light yellow to deep gold in color and usually brilliant in clarity. […] Hop character is generally low to moderate, as is the alcohol level (3.8 to 5.5% ABV). A very slight residual sweetness should be offset with just enough hop bitterness to keep things balanced. […] Balanced and easy drinking is the key.

He goes on in the article to say that “a simple malt bill is best for this style” — that “North American two-row malt is the standard” and you can “use a touch of wheat, light color crystal, or some lightly toasted character malts […] but keep it simple.”

From this, I got the idea that I would go with about 5% wheat, but otherwise straight 2-row with some golden light DME to boost the gravity.

The trouble for me was trying to decide on which yeast strain.2 That same Zainasheff article cites 1056 and WLP001 as preferred strains. The last blonde ale I’d brewed was Summerclone, and I’d gotten great results from 1272, another strain that he mentions. But for some reason, I felt drawn toward Wyeast’s 1332 Northwest Ale. Maybe because of what it did for Tilde Galaxy?3

The other big open question around this formulation had to do with sugar. I’d gotten it into my head that blonde ales were brewed with some percentage of corn sugar, mostly as a means to dry them out. (Was I confusing blondes for cream ales, perhaps?) The BJCP guidelines for 18A. Blonde Ale indicated: “Generally all malt, but can include up to 25% […] sugar adjuncts.” But then I compared my formulation with six others that I’d found, and only one of them contained any sugar adjuncts. (And that was a Belgian blond with candi sugar.) Once again, I deferred to Zainasheff’s advice on this one. 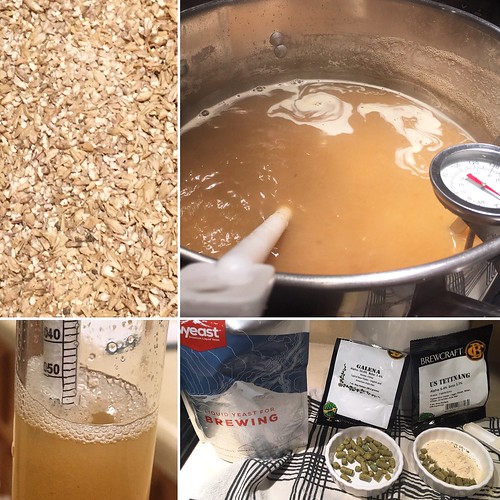 Brew day came on a Monday night when I said to myself, “Screw it — I’m not going into the office tomorrow anyway!” I filled my kettle and got the heat going on the strike water by 7pm. I mashed in 153.5°F and held that as steady as I could for 75 minutes. I skipped the mash-out and started heating for the boil with 3.25 gallons of wort at 1.052. By 9:15pm, the kettle was boiling and I just followed along with my formulation. After chilling the wort, I did my post-boil science: 2.75 gallons with the refractometer reading 23.2%Br (1.093); 2.25 gallons of top-off should give me a wort of 1.051 which would be just one point over my target. Sweet!

But I wasn’t going to complain about that.

Finally, at 11:15pm, I pitched my now quite swollen pack of 1332, moved the carboy into the fermentation chamber, and set the temperature controller for 67°F (±2°F). 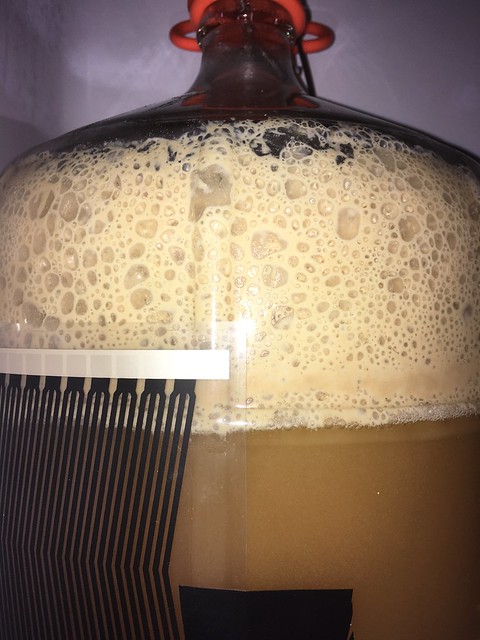 Possibly also worth noting that when I lifted the lid of the fermentation chamber, there was strong aroma that was fruity and slightly alcoholic. I was a little concerned that the yeast might be pumping out fusels, but I had no way to check this. Other than the aroma, there was no evidence of that — the temperature controller was doing its job and keeping conditions in the right range. If anything, my observations suggested that the temperatures were dipping below the strain’s low side — not what I’d expect for fusel production!

Five days after pitching, I took my first gravity reading. I sighted it at 1.018 and after the adjustments, recorded it as 1.014. I also decided to get a little taste of that sample… 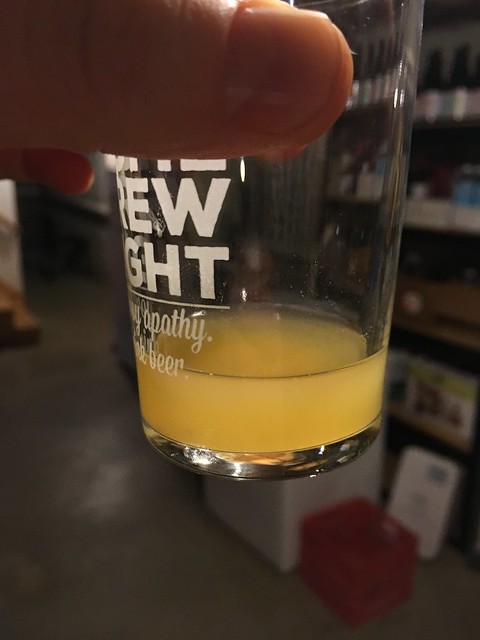 My notes from that day say:

I took a few more gravity readings over the next couple of days, watching it slowly but steadily drop until it finally settled at 1.009.

From there it was a simple matter of cold-crashing (for four days),5 siphoning it to a keg, and getting it onto CO₂ so I could start pouring.

Also… given how happy I was with 1332 the first time and given how satisfied I was with the 83.2% apparent attenuation this time… I decided I would try my hand at yeast harvesting. 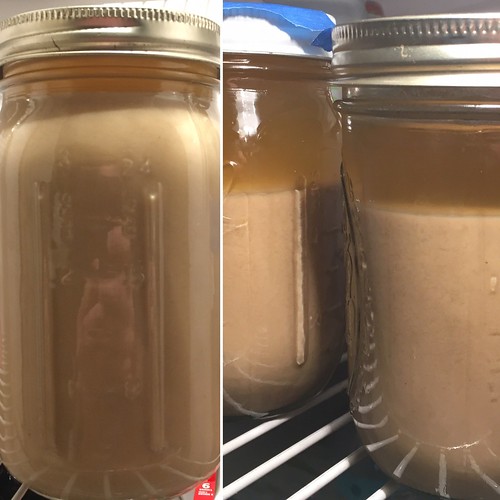 But that’s a story for another day. 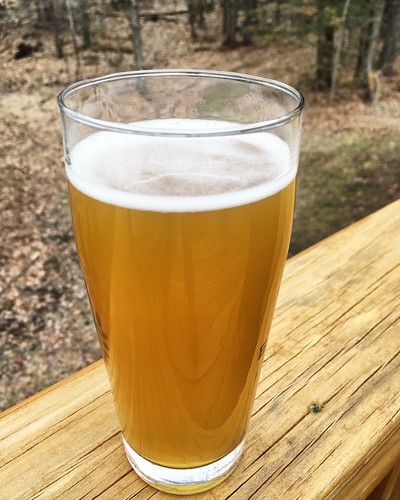 Now, given the story I’ve just told, it wouldn’t be unreasonable to conclude that my expectations were low. But that being said, this beer exceeded my expectations.

It didn’t quite clear as much as I’d hoped — and perhaps I really should start fining with gelatin on the regular. Just the same, I did get that light golden straw color in the glass. There’s a delicate head and effervescent carbonation.

On the aroma front, it’s lightly floral with a hoppy-spicy hint that sits supportively underneath that. Malt aromas are low, but lean to bread. Fruity esters are present — but just a suggestion of them.

Flavors are well-balanced. It leads with bready and moderately grainy malt notes which are supported about mid-palate by some spicy noble hops. (The Briess 2-row is showcased nicely!) A moderate bitterness comes through at the finish.

Mouthfeel is on the medium side of light, with lively carbonation. It finishes dry without being drying.

It’s recognizably a beer, and an approachable one at that. This was one of the first times where I truly appreciated how much you could do with so few, and such basic, ingredients. I’d feel good about serving this to anyone. I don’t know that I’d necessarily make this formulation again, but I learned a few important lessons here — in particular about how to focus on making ingredients come together harmoniously. An object lesson in how “even simple can be special”.6

The partial mash (BIAB) recipe for Younger Sister is as follows.