It’s been since December that I last had Honestatis on draft around here1 and felt I was overdue to brew the next batch. I’d been tinkering with the formulation a bit, following some tasting notes from the last time I’d brewed it with Dan, but as it happens… so was he. Rather than duplicate effort, we decided once again to combine forces. Honestatis (Mk. VIII), the deviant redux:

The last two times I’d gone to brew this beer, I found out that Dan had it in his pipeline as well. It seems he’s taken just as much of a shine to this formulation as I have. At this point, it’s just about as much his beer as it is mine. We each tug it in slightly different directions, but somehow both manage to wind up in the same place with it. Rather than get possessive about it (because that would be silly), I feel this excellent sense of partnership with him. And it would seem that he does as well — because when it came time to enter beers for NHC (and I stupidly forgot to get my AHA membership in on time), Dan was kind enough to list me as the co-brewer. Which I’m grateful for because it took a silver medal in the First Round (New York). 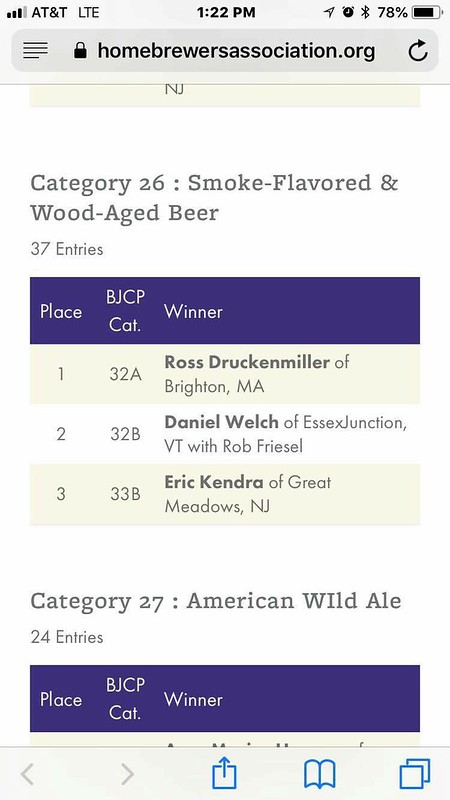 Since the beer would be advancing, Dan decided to brew up another batch. Could we improve upon it enough that we would enter that instead of the Mk. VII bottles that we still had stashed?

As for myself, I mostly just wanted some to drink again.

I’ll be honest, I was a mostly absentee brewer on this one. The day before had been our BJCP exam and all things considered, I couldn’t reasonably justify a full brew day away from the family. Dan kept me up-to-date with some pictures though.

Like how he basically maxed out the kettle volume for the mash following that second infusion:

And how the weight of the water-logged grains basically destroyed the basket he had been using for the BIAB drain:

Note the hard bend in the handle?

I did manage to scoot over for the tail end of things. Dan had just gotten the flame out when I arrived so I could take some shifts stirring while we whirlpooled and chilled. (See? Only partially absentee.)

Normally I ferment this beer with Wyeast 1332 Northwest Ale. I like its ester profile, how it accentuates the smoky and rye aspects of this beer, and how it tends to drop pretty bright even without much help.

But… I’ve had more than a couple people ask me if I’d thought about doing a lager version of Honestatis. (“Yes, of course.”) And I’ve read more than a couple articles out there about how Wyeast 1007 German Ale is such a clean ale strain at its low end that one could confuse it for a lager strain. And I just happened to have some very (like literally that morning) fresh 1007 slurry from Uncle Rico.

I locked in the controller at 60±1°F and let it go. After about 24 hours, I was seeing some krausen form and was getting some decent activity in the blow-off bucket. Around +49 hours, I caught a whiff of what (to me) smelled like hydrogen sulfide, but that blew off pretty quickly.

By +94 hours, the activity had started to slow down. I disconnected the heat wrap and set the controller to 64±1°F to allow it to free-rise for the rest of its time in the fermentor.

After about two weeks (and two gravity readings), it had finished with a gravity of 1.011.

I siphoned from the carboy into a keg (where I’d added the gelatin for fining) and burst carbonated it at 40 PSI for about 36 hours at 38°F.3

An interesting fresh twist on this classic of the house. 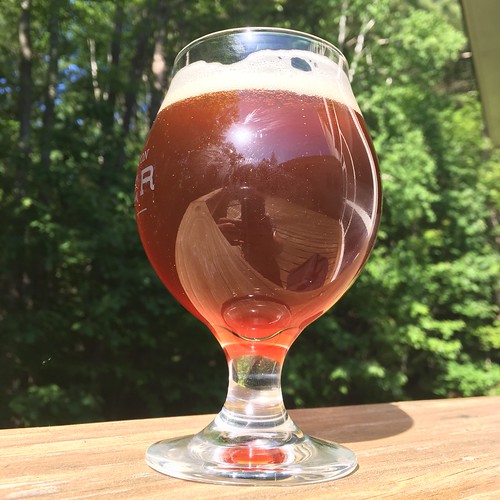 APPEARANCE. Burnished copper with some fiery red highlights in the right light. Good clarity, though doesn’t quite reach brilliant. Dense, creamy khaki head that persists for a good long time.

FLAVOR. Balanced interplay of smoke and spice. Leads with a moderate grainy-sweet note. Mid-palate is where I feel most of the spicy-grainy character of the rye (medium intensity), complemented by some light toasted bread. Smoky character is relatively mild except retronasally where it dominates. Low herbal/floral hop character. Medium-high bitterness. Esters barely whisper in my ear — high enough that I know they’re there, but low enough that I can’t really pin them down to a specific character. Finishes dry, with the aftertaste tilting over to smoke and bitterness.

MOUTHFEEL. Medium body. Medium carbonation. No detectable astringency or other puckering. A bit of a rustic feel in the back of the mouth in the aftertaste.

OVERALL IMPRESSION. Using the 1007 changes the character a lot more than I thought it would. When the ester contribution from 1332 is at the right levels, there’s an interesting interplay there between that fruity character, the dry spiciness of the rye, and the smoke. Absent any significant fruity ester, there’s “just” the rye and the smoke, and then low level complementary flavors like the toasty malt and the herbal/floral hops. This winds up making it (to my palate at least) more of a rye amber ale than a smoky amber ale.

As such (and Dan agrees), next round of NHC will see the carefully cellared bottles from the Mk. VII batch and not this batch.

That being said, I don’t dislike this batch. It’s just different. Different in such a way that I can imagine a bifurcation happening, with one variation fermenting more cleanly and emphasizing the rye more, and the other being a little fruitier and emphasizing the smoke more. I’ll need to meditate on that thought in the coming months.

To that end, I’m not going to comment too much on what I’d change for next time since most of the changes here were Dan’s and on his system. I had my own “Mk. VIII” formula in BeerSmith already which I’ve since bumped to “Mk. IX” — and I’m going to leave that locked in and untouched until I’m ready to brew that specific variation, which already has all my notes from last time around.

The all-grain (BIAB) recipe for Honestatis (Mk. VIII) is as follows: