Honestatis. My house extra amber ale. I’d been out of it since mid-May. An awfully long time to be out of the beer you were born to drink. The time had come to brew up the next batch. But there was a plot twist. A friend of mine had brewed a batch or two of his own take on it, and we were both gearing up to brew this at the same time. Why not combine forces? Honestatis (Mk. VII), the redux: 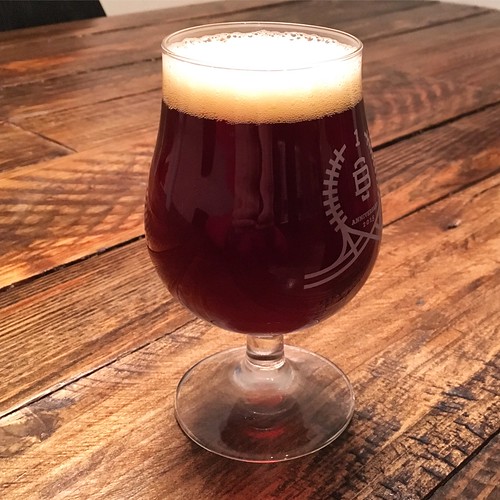 My friend Dan has been brewing for… I guess it’s about a year now? He’s gotten himself into a good rhythm, gotten creative, and has just generally gone big on his brewing. Along the way he was looking for a red ale recipe to crib from, so I sent him mine. He scaled down the gravity a bit, made a batch, and really enjoyed it. He shared some with me and I agreed, he’d made a tasty red with some nice rye notes and smoky character.

Fast-forward to late-October 2017 and we were (coincidentally) both gearing up to brew fresh batches. We put our heads together on the formulation, shooting for about a 1.065 O.G. (right about in the middle of where we’d each looked to land), with 10% cherry wood smoked malt, and bringing in a significant quantity of BestMalz Red X to try and boost the red color. The special twist that Dan wanted to bring to the brew was a single decoction. “Sounds good to me,” I said — and we set a date for it.

The brew day’s forecast called for rain. Not to be deterred, Dan set up his scaffolding (standard procedure for the BIAB setup) and then put a bunch of tarps over that. His son called it “the Brew Temple”:1 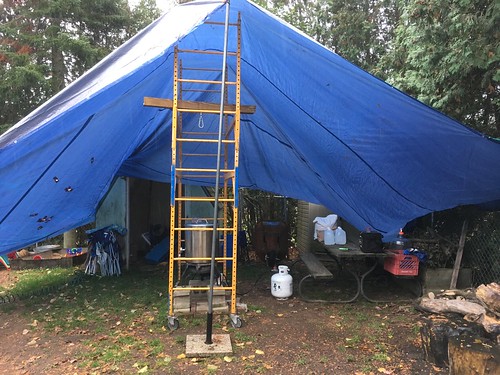 About 9:30 that morning, we got to brewing. We had used the Bru’n Water spreadsheet to work out our modifications (0.25 g/gal each gypsum and calcium chloride, also 0.2 g/gal Epsom salt) and mashed in as soon as the temperature had hit 156°F. We held the infusion at 148°F for 40 minutes. 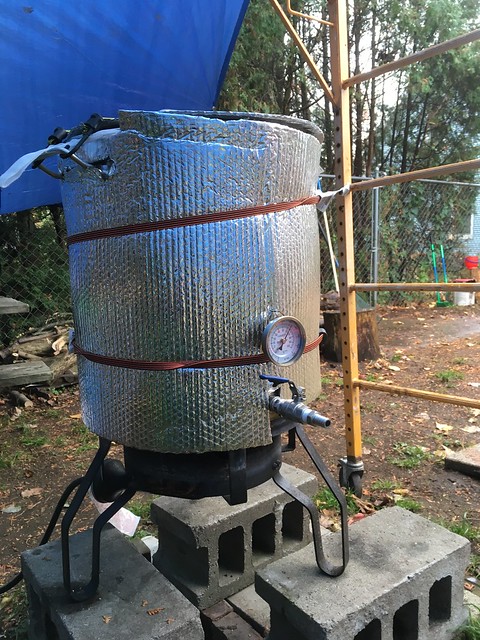 Meanwhile, we got the decoction going. While not a traditional decoction method, we had a separate kettle going to mash those grains, starting at 148° while heating it to boiling. It took about 25 minutes to get the side mash to boiling; then we boiled it for 20 minutes — stirring the whole time. 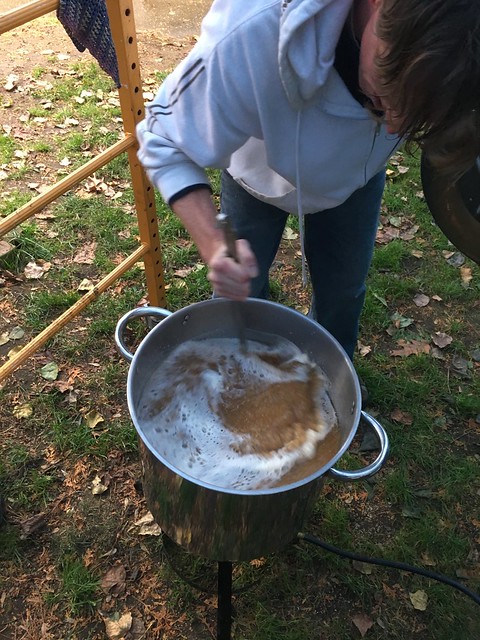 We used a pitcher to transfer the decoction into the primary kettle, where it rested for another 40 minutes at 159°F. That being said, there were some additional grains we needed to add here (specifically the caramel and smoked malt) — but we’d already filled the kettle to the brim and needed to back off a bit. 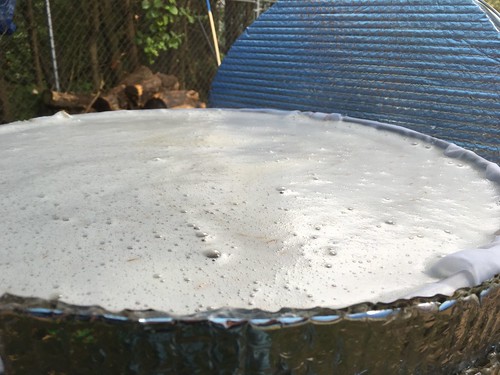 So we used those same pitchers to transfer some of the mash back into the smaller kettle, where we crossed our fingers that it would sufficiently convert. 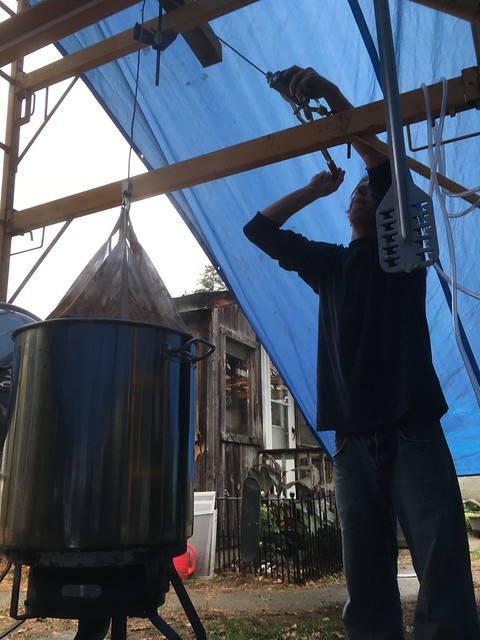 We pulled the bag at the end of the second rest and did a bit of squeezing to coax out some more wort. Then we used some strainers to transfer the wort from the smaller “side mash”. Pre-boil gravity was reading 1.056. Right about where it was supposed to be. And looking pretty good too. 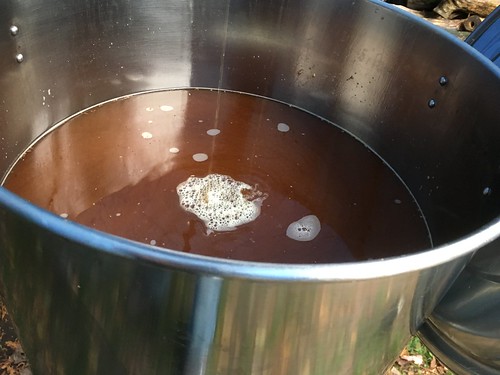 Dan’s burner got the wort up to boiling in about 15 minutes. We added the hops according to the schedule. When the 60 minutes were up, we started water through the wort chiller and took turns stirring until we got it down to 150°F. We added 3 oz. of Willamette for the whirlpool (still taking turns stirring) and let them steep for 5 minutes. Then we chilled it the rest of the way down to 70°F. 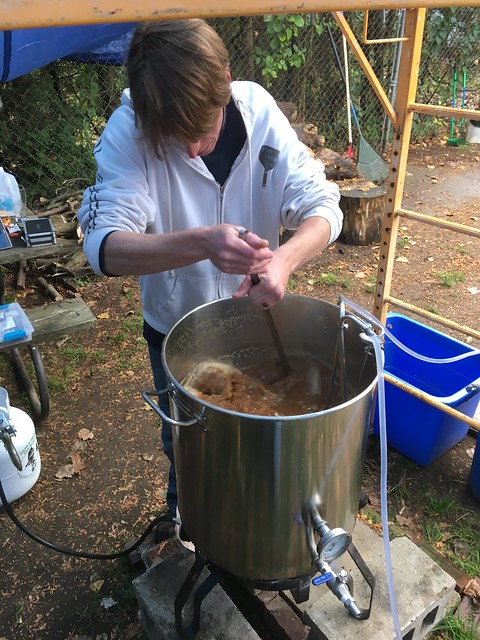 In our post-boil science, we wound up with about 12.5 gallons of wort with a gravity of 1.066. So… basically nailed the gravity but a little off on volume. 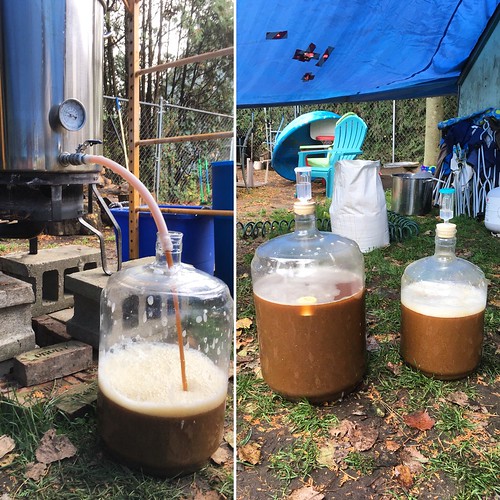 Around 3:30pm on the afternoon of brew day, I pitched my yeast from the starter and put it into the fermentation chamber at 67±1°F. Fermentation got under way within a couple of hours and I just stood back and watched it churn. At +63 hours post-pitch, I ramped the temperature controller by 1°F; then another at +87; and another at +111. At +136 I took the first gravity reading (1.017) and given that I’m accustomed to this strain giving me attenuation in the high-70s/low-80s, I cranked the temperature another 2°F. At +186 the gravity was still 1.017; and while I should have known that would be F.G. (spoiler alert!), I added 2.5 tsp. of yeast energizer and gently roused. When, at +287, the gravity was still reading 1.017, I knew enough to call that final gravity.

I cold crashed the beer for 12 hours, added gelatin for fining, and let that settle another 24 hours before kegging. 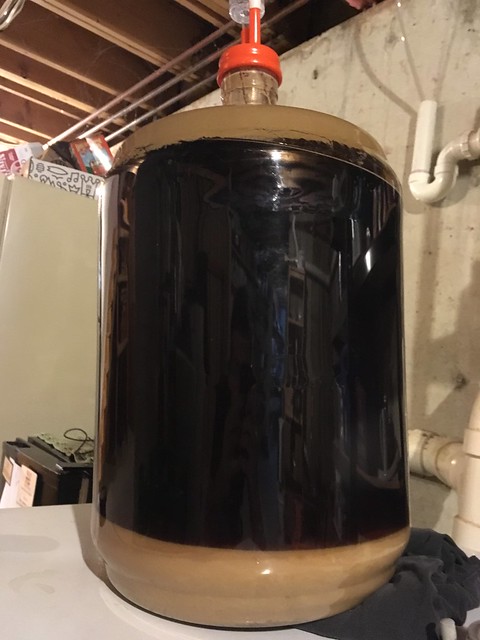 I couldn’t wait to get it on gas but… Otaku Supper still had a ways to go. Luckily it was only a week later. 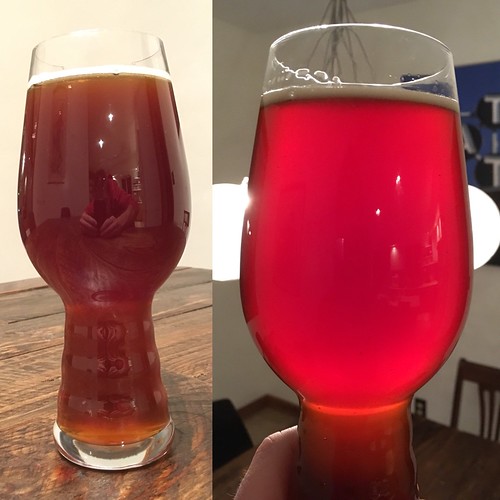 AROMA. The smoke leads, but isn’t overwhelming. Mild caramel. Some spicy/grainy notes I’d readily attribute to the rye. A little bit of toast. Hops contribute little — a subtle earthy/floral note, but that’s about it. There’s some esters in the background, suggesting cherry and plum.

APPEARANCE. The hues are in the deep copper range, flirting with brown. There are these gorgeous ruby and crimson highlights when held up to the light. Clarity is great, and it’s easy to see a fair number of small, fast-rising bubbles throughout the glass. When first pouring, there was a 2cm khaki-colored head with good retention; once it started to collapse though, it collapsed quickly and left just a hint of its former glory as a light ring around the surface.

FLAVOR. Smoke is assertive and provides the structure that the rest of the flavors hang from, and yet it doesn’t overwhelm. The rye is most prominent mid-palate, presenting as spicy and grainy. Supportive caramel notes come in and out of focus throughout, though almost uniformly mild in intensity. As it warms, the bready and toasty Maillard character comes out more. The perception of hop bitterness is medium tip-toeing toward high; it seems in balance to me. That said, the hops contribute only a little to the flavor — a little bit of black pepper. The esters detectible on aroma present similarly on the palate (i.e., cherry and plum) and similarly mild. The balance tilts to malty, but there’s enough bitterness that it doesn’t get too sweet.

MOUTHFEEL. Medium bodied, finishing dry. A pleasing bite from the carbonation, enough to accentuate the flavors. A slight suggestion of creaminess. If there’s astringency there, I’m not getting it. Mild alcohol sensation.

OVERALL IMPRESSION. Pretty damned close to what I’m after in this beer. Smoke and spicy rye. A drying finish. Enough bitterness to balance… though maybe just a little more bitterness would help. I know it doesn’t fit neatly into a BJCP style… and I don’t care. As I’ve said before, This is the beer I was born to drink!

Changes for next time…?

First, I don’t know if the decoction was worth the extra effort. There were enough other changes in this batch from the last that it would be a huge leap to make that statement categorically — but if it’s contributing anything unique or distinct, I couldn’t put my finger on it.

Second, I think a little more bitterness is in order. This may seem like a strange remark for a beer that I just described as “tip-toeing toward high”, but I’m of the opinion that it needs more intensity there to contend with the smoke. From a calculated IBU perspective, this one falls right in the middle of previous batches (which, to be fair, are pretty tightly clustered anyway) — that said, I think just a touch more (push it to 40 IBU?) would help significantly in that “devil’s in the details” sort of way.

Third… likely some small grain bill adjustments. We’d heard that Red X would contribute a similar flavor profile as Munich (which seemed reasonable to me); but I wonder if adding some Munich back in would help with the depth of flavor? The 90L caramel malt is probably a little heavy — maybe back that off to 40L, or even drop it all together. And of course, I’m always after strong smoke and rye character.

Fourth… wonder if there’s anything I could do to improve head retention there?

And/but/so… I’m nit-picking. Like you do with the things you love.

AND/BUT/SO… I’d also like to try another couple of variations. A session-strength version? A dry hopped version? A lager version? So many options!

The all-grain (BIAB) recipe for Honestatis (Mk. VII) is as follows:

Starting with the Champlain Water District profile as a base, modifying to meet the “Amber Balanced” profile (Bru’n Water spreadsheet):