Given the relative success of the first batch of this single hop APA project, and given that I hadn’t done any brewing at home since the Roggenbier in July, it seemed like a good opportunity to make a batch of straightforward-but-delicious pale ale for home consumption.1 And given my recent excitement for New Zealand hop varietals, there seemed no better time than the start of September for Prosody (Motueka). 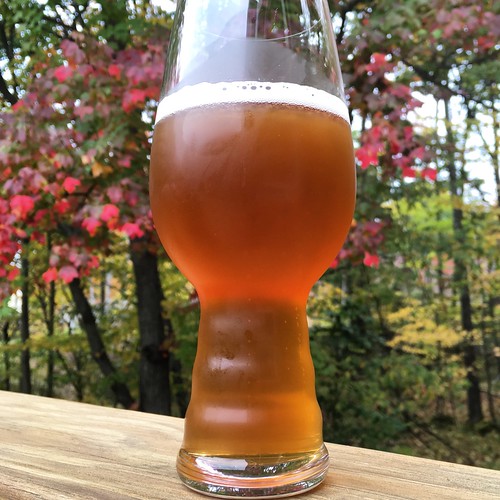 First off, I knew I wanted to brew something with Motueka. The last couple of times that I had encountered that hop, it gave off truly delightful aromas and flavors — lush tropical fruits and lime zest. In addition to that, it has a significant alpha acid proportion, so it wouldn’t be like that time where we wanted to make a single hop but would have needed to use an obscene amount of those hops.

Secondly, a big part of the single hop APA project was to showcase each hop singularly, against the backdrop of the same grist. That being said, while the grist of the first batch was (shall we say?) close to “correct”, I knew of a couple small tweaks that would better support the hops behind. In particular, I dropped the 10 oz. of Briess 40L caramel malt and replaced it with 10 oz. of Munich Dark. It would lighten the beer’s color ever so slightly, but should develop a better flavor — more malty, less sweet.2

Third, given the recent discovery that my “naked” water profile was better suited to malty beers, it was time to manipulate it a little. I hashed out some adjustments in Bru’n Water based on its “Pale Ale” profile, and made sure that I had a scale sensitive enough to deal with fractions of a gram.

Lastly, I knew that I wanted to use some of the 1332 strain that I’d harvested from Honestatis (Mk. VI) (which was the same generation that had fermented the El Dorado batch of Prosody). And/but/so… that slurry had also been harvested March 14th and was over 150 days old as I tried to work out the formulation tweaks and the brew day timing. Was I to try and revive it? Was I to dump it and start a brand new culture from a fresh smack pack? But then I saw this tweet from Michael Tonsmeire and knew that I should just go for it:

Guess I shouldn't have been worried about my house saison culture after 9 months in the fridge. 18 hours after pitching a vitality starter! pic.twitter.com/P3e2qKxAw0

The night before brew day, I measured out my brewing liquor for the mash and spiked it with the minerals (5.29 g gypsum, 0.88 g calcium chloride, 0.88 g Epsom salt), plus 2 teaspoons of pH 5.2 stabilizer, and ¼ Campden tablet. I gave that some thorough stirring to get it all into solution before I went to bed. 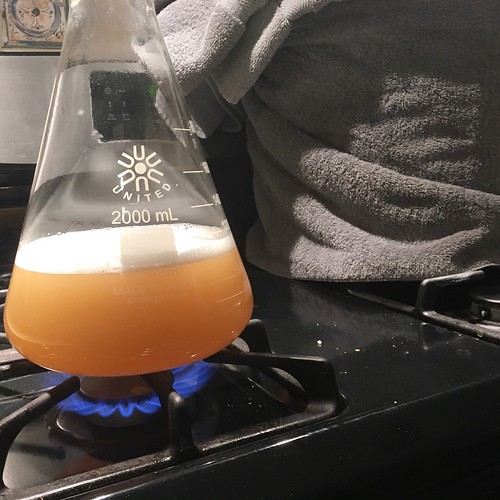 My first order of business the morning of was to get the mash water heated and meanwhile get a vitality starter spinning. While the flame was on the kettle, I measured out 1 L of water and added 100 g of golden light DME and ¼ tsp yeast nutrient. After mashing in (150.8°F, thanks for asking), I put the flame to the Erlenmeyer flask to boil that for 10-15 minutes; an ice bath got it down to 70° after about 15 minutes, then I got approximately 400 mL of slurry on the stir plate. 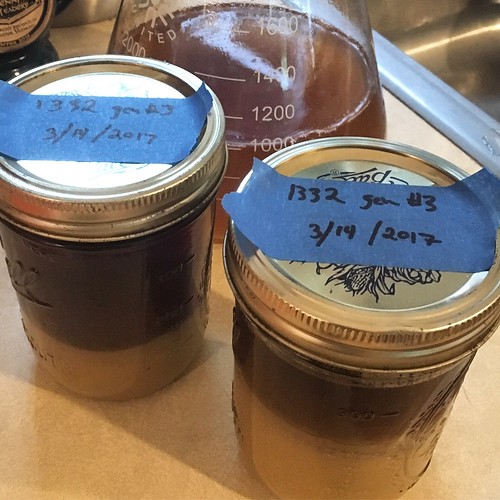 The timer went off for the mash at 75 minutes and I pulled the bag, skipping the mash out and deciding against any sparge. I had 10.2%Br in the refractometer before the bag squeeze; 11.8%Br afterward. According to my volume markers I was right around 3.4 gallons. Satisfied with those readings, I turned the flame back on to start the boil. In the meantime, I collected 2 gal. of top-up water (the minimum I would need for my batch size) and added ⅛ Campden tablet to that.3 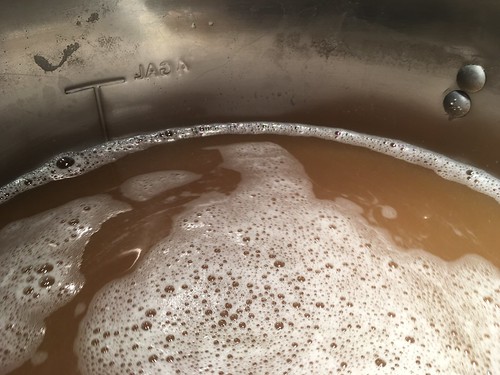 Once the wort was boiling, I followed my hop schedule for the 60 minute boil time. (And of course the DME late addition at 15 minutes.) When the timer went off, I chilled it down to 140°F, added my 1 oz. Motueka for the whirlpool and 15 minute hop stand, then chilled it the rest of the way down to 70°F. At this point, my refractometer was telling me 24%Br — which BeerSmith converted to 1.096. And given that I had approximately 2.9 gal. worth of wort, the 2 gal. dilution would bring it to 1.057. But after combining the wort with the dilution water (and some vigorous shaking and stirring), the hydrometer came up 1.060 — a significant 5 points above my target O.G. So, I diluted it down a little further to get it to 1.057 and split the difference there.

The carboy went into the fermentation chamber at 67±1°F shortly thereafter while I let the vitality starter finish resuscitating the yeast, and pitched about an hour or so later with fingers crossed. I was a little worried that, despite that Tonsmeire tweet as evidence to the contrary, all the conventional wisdom would turn out to be true and 172-days-old yeast slurry wouldn’t do anything at all. By +19 hours there was some evidence of activity though, and by +27 there was no doubt that it was fermenting.

Brief Aside About Timing

Backing up about a week from the brew day, I had special ordered the half-pound of Motueka on Saturday night, got my shipping confirmation on Sunday. I was getting all excited for making and then drinking all this beer. And then Monday morning I had an invitation from a friend for his turning-into-an-annual Brew and BBQ party. I’d participated the last two times he’d done it (the first time even being my first ever brew) and I’d already told him that if he threw the party again, that I would be in. So now I found myself with a grimace on my face. I was about to make this totally killer beer, that I’d selfishly wanted to horde for myself, and now (given all the various specifics of timing) I would be forced to bring this beer as my contribution. Then again… may as well bring your “A” game, right? So that’s just what I would have to do. (Spoiler: it was well-liked by most people who tried it that night.)

As I mentioned above, I pitched this yeast with my fingers crossed. Could a vitality starter really revive a slurry that was almost 6 months old?4 And also, as I mentioned above, within about a day or so, those fears were allayed. The fermentation got quite vigorous, in fact, throwing a significant quantity of krausen into the blow-off bucket and “burping” away for days and days. Around +125 hours, I ramped the temperature a bit to encourage full attenuation; then I ramped it again at +148. I let the yeast clean up for about another week and had a nice finishing gravity of 1.011. 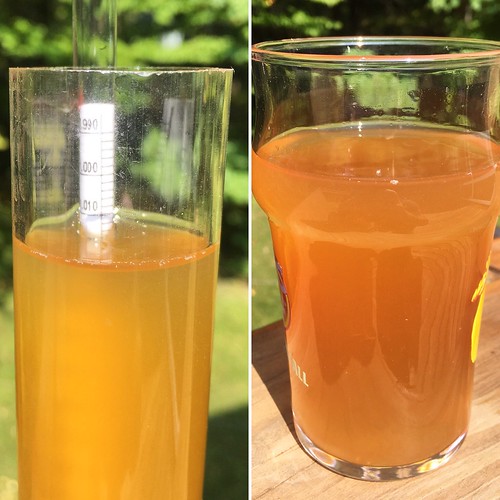 Though racking to a secondary vessel has generally fallen out of favor with me, I did so here so that I could dry hop without “contaminating” the yeast that I wanted to harvest with even more junk to wash out. I siphoned over about 4.5 gal. of the beer onto 2 oz. of Motueka and then covered that with a black t-shirt. I let that sit for 3 days in the basement before cold crashing it and fining with gelatin. Two or three days after fining, I siphoned the beer into the bottling bucket, primed with 4.3 oz. of corn sugar, and capped 45 × 12 oz. bottles.

Short-short version: changes to the grist were just what the doctor ordered; nice Motueka showcase, though I would have liked to see a little more intensity, particularly in the aroma department. Highly drinkable, and that distinct afternoon porchtimes pale ale character. 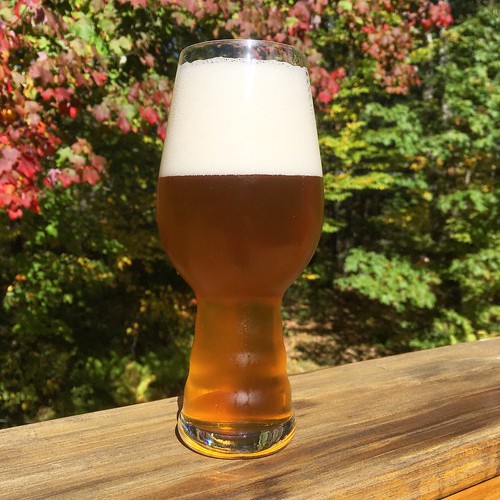 AROMA. A lot of lime zest and tropical fruit notes (a little bit underripe mango?) from the Motueka — all of which I was expecting, though less intense than I was hoping. The malts present as cracker and lightly toasted bread. No obvious esters or DMS — very clean!

APPEARANCE. Gold. Moderately clear; the slight haze is something I would attribute to the dry hopping. White head is foamy and persistent. Plenty of visible carbonation bubbles, maybe crossing over into effervescent.

FLAVOR. Leads on the tip of the tongue with a balanced cracker malt character and lime zest from hops. Mid-palate the former stays about the same, but the latter intensifies and adds some more tropical undertones. It finishes with a fruity flourish and a lingering bitterness (assertive but not aggressive). Retronasally the hops character shines through — tons of lime character overall.5

MOUTHFEEL. On the lighter side of medium. Pleasing carbonic bite. A suggestion of creaminess. No real astringency detectible. It’s crisp enough, though I would like it to be ever so slightly more so.

OVERALL IMPRESSION? Very nearly nailed this one; all the aromas and flavors are right, I was just looking for a little more intensity. If this were a game of darts, we’d be inside the triple ring. I think the water adjustments helped to sharpen the bitterness and contributed to significantly crisper impression. I’m on the fence about whether it needs to be more bitter. As far as the dry hopping goes — I’m convinced now that I should have done so with the El Dorado batch. That said, another 1-2 oz. would have likely brought the Motueka character into the intensity level I was looking for. I compared my dry hopping rate here to Tilde Galaxy, Vicious H-Bomb, Medusa APA, and Calypsonian — and based on those observations… yeah: 3-4 oz. for a 5 gallon batch doesn’t seem unreasonable.

Changes for next time? Difficult to say! I think the grist is working out well, though I may switch from Munich Dark to Munich to lighten the color slightly. I also suspect I should work on an all-grain version of this recipe. Given the nature of these single hop experiments, a bigger dose of dry hops will help make that character stand out. Very please overall though — not to just figure out which single hop to use next time.

The partial mash (BIAB) recipe for Prosody (Motueka) is as follows: